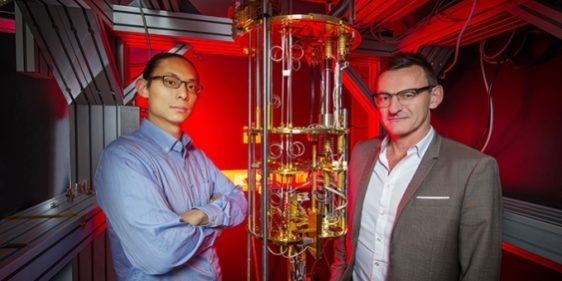 Researchers at the University of New South Wales have published breakthrough research which will allow the temperature at which quantum computers work to be raised from today’s temperatures of close to absolute zero degrees Kelvin.

A team led by Professor Andrew Dzurak showed in a paper just published in the journal, Nature that quantum computers can work at warmer temperatures and can be manufactured in conventional silicon chip foundries.

The researchers’ proof-of-concept quantum processor unit cell, on a silicon chip, works at 1.5 Kelvin – 15 times warmer than the main competing chip-based technology being developed by Google, IBM, and others

“This is still very cold, but is a temperature that can be achieved using just a few thousand dollars’ worth of refrigeration, rather than the millions of dollars needed to cool chips to 0.1 Kelvin.

“While difficult to appreciate using our everyday concepts of temperature, this increase is extreme in the quantum world.”

The building block of quantum computing is a sub-atomic structure, a qubit which can be used to store and retrieve data.

The unit cell developed by Dzurak’s team comprises two qubits confined in a pair of quantum dots embedded in silicon.

The UNSW team was able to ‘read’ the qubit pairs using electrons tunnelling between the two quantum dots.

Entech Electronics and Brisbane diagnostic company @EllumeHealth have shown that for long production run #electronics #manufacturing, the old prejudice that Australian manufacturers have to offshore production to compete is unfair.