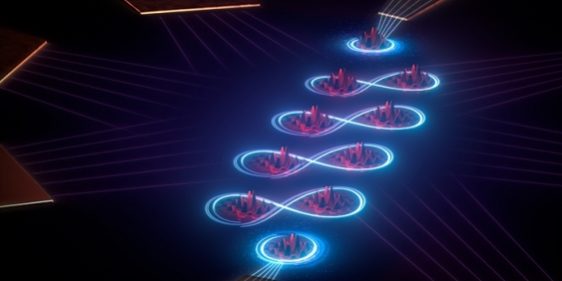 A team from UNSW Sydney has successfully simulated the behaviour of an organic molecule using a quantum circuit, an achievement they say is two years ahead of schedule and likely to lead to a commercial result in five years.

The team’s results, achieved in 2021, were published in the prestigious scientific journal Nature on Thursday. The paper described how they built two ten-quantum dot replicas of a molecule of polyacetylene in silicon, with each quantum dot placed to represent an atom in the chain of polyacetylene (pictured.)

These circuits were able to perfectly match theoretical predictions on how electrons would behave in the real-life molecules.

“What it’s showing is that you can literally mimic what actually happens in the real molecule. And that’s why it’s exciting because the signatures of the two chains are very different,” said Professor Michelle Simmons, the lead researcher and a former Australian of the Year, in a statement.

“Most of the other quantum computing architectures out there haven’t got the ability to engineer atoms with sub-nanometer precision or allow the atoms to sit that close.

“And so that means that now we can start to understand more and more complicated molecules based on putting the atoms in place as if they’re mimicking the real physical system.”

The polyacetylene molecules were chosen as their 10-atom chain is near the limits of what a classical computer can simulate.

The next steps for the team – members of UNSW spinout business Silicon Quantum Computing – would include building more complicated molecules to understand their behaviours.

Simmons compared development of quantum computers to progress in classical computers, with a single transistor achieved in 1947, then an integrated circuit in 1958, with chips in commercial products such as calculators about five years afterward.

“We started with a single atom transistor in 2012. And this latest result, realised in 2021 is the equivalent of the atom-scale quantum integrated circuit, two years ahead of time,” she said.

“If we map it to the evolution of classical computing, we’re predicting we should have some kind of commercial outcome from our technology five years from now.”

The paper can be accessed here.