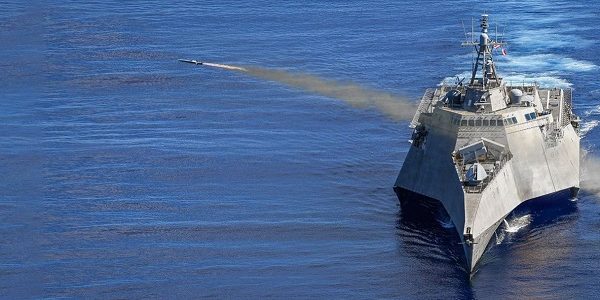 The dozen Independence-class Littoral Combat Ships delivered so far to the US Navy are at the one time shipbuilder Austal’s most successful design yet at the same time the one that has not quite lived up to its promise.

The Independence vessels were conceived as a breakthrough ship. It was to be high-speed, agile, warship equipped with interchangeable, modular mission packages allowing the same ship to conduct mine warfare, anti-submarine warfare and surface warfare operations.

With a highly trained crew of as few as 43, a top speed above 40 knots, excellent seakeeping capabilities and the largest flight deck on any USN surface combatant it seemed destined for greatness.

It certainly has contributed to Austal’s profits in recent times, allowing the company to expand to the Philippines, Vietnam and through a licensee to China.

But the promise of rapid interchangeability was not really delivered, there were deficiencies in crew training which limited flexibility, and the ships were just under-gunned.

Austal had based its design on a highly successful aluminium passenger ferry, and is already spending $100 million alongside the US Department of Defence adding steel shipbuilding to the capabilities of its Mobile, Alabama shipyard.

Now the US Navy is pressing for a budget to add its new Naval Strike Missile on 31 of its 35 Independence and Freedom class LCS’s.

The navy’s rationale is a perception that China is catching up to the US navy, with the new anti-ship and land attack cruise missile adding significant firepower to the US fleet.

The missile, pictured being fired from the Independence class LCS USS Gabrielle Giffords, has a range of 185 kilometres and eludes enemy radar and defence systems by performing evasive manoeuvres and flying at sea-skimming altitude.

Raytheon Missiles & Defense will make the Norwegian designed missile in the US.

The Navy’s wish is contingent on it making the defence budget, however the USN is very bullish about the LCS’s potential.

With a further seven LCS’s now under construction in Mobile, Austal’s LCS appears to have a bright future.