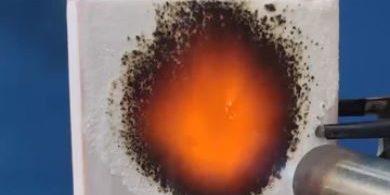 University of Southern Queensland researchers have developed a fire retardant coating for building materials that mimics the properties of volcanic lava.

Professor Song said lava sparked his idea of a hybrid coating that would melt and then gradually form a flowing but non-combustible ceramic layer when exposed to extreme heat.

He said: “Melton lava is like a viscous flowing liquid but non-flammable.

“Once cooled, it solidifies to become a ceramic layer that does not support fire.

“Inspired by this interesting phenomenon, we designed a fire retardant coating that can create a non-combustible ceramic layer which can offer fire protections for the underlying substrates, just like a fire shield.”

USQ released a video (below, and pictured) showing its retardant-coated wood resisting high temperatures when exposed to a naked flame.

Professor Song said spraying the coating on building materials, such as thermal insulation foam, timber and steel structures during construction could prevent disasters like the 2017 Grenfell Tower blaze in London, where 72 people died.

“Polymer foams were identified as the main cause of recent catastrophic disasters, particularly the Grenfell Tower fire.

Professor Song’s research, which was supported by an Australian Research Council Future Fellowship, was published in the journal Matter.