The maker of local favourites FruChocs and Crown Mints has become a national player in recent years since buying the Violet Crumble brand, recipe and production line from Nestle in 2017.

It is now gearing up to produce Violet Crumble’s younger sister Polly Waffle after an 11-year absence.

The Adelaide-based manufacturer experienced a double-digit sales bump in March and April across its business as people bunkered down on couches with their favourite chocolate brands.

While that was a welcome sugar-hit for the business, its steady growth in recent years from 70 to 110 staff has been fuelled by the addition of the Violet Crumble chocolate honeycomb bar and led to the move to 24/7 production in recent months.

The purchase of Violet Crumble was a logical step for the family-owned business as it was already a major honeycomb producer for private labels and its own brand, which was renamed Bumbles in 2019.

Robern Menz CEO Phil Sims said the investment in Violet Crumble had already been recouped and had cemented the company’s position as the biggest honeycomb producer in Australia.

He said expanding Violet Crumble’s distribution into petrol stations and convenience stores and introducing new formats were the keys to its success.

“The original bar that we bought is up at least 50 per cent on the volume that we inherited from Nestle and we’ve come out in other variants now such as cubes and nuggets as well,” Sims said.

“Violet Crumble is a national brand and very much a part of our Australian culture and it’s had a really strong place during COVID because people trust brands and the comfort brought about by the memories of things they’ve grown up with and trusted. 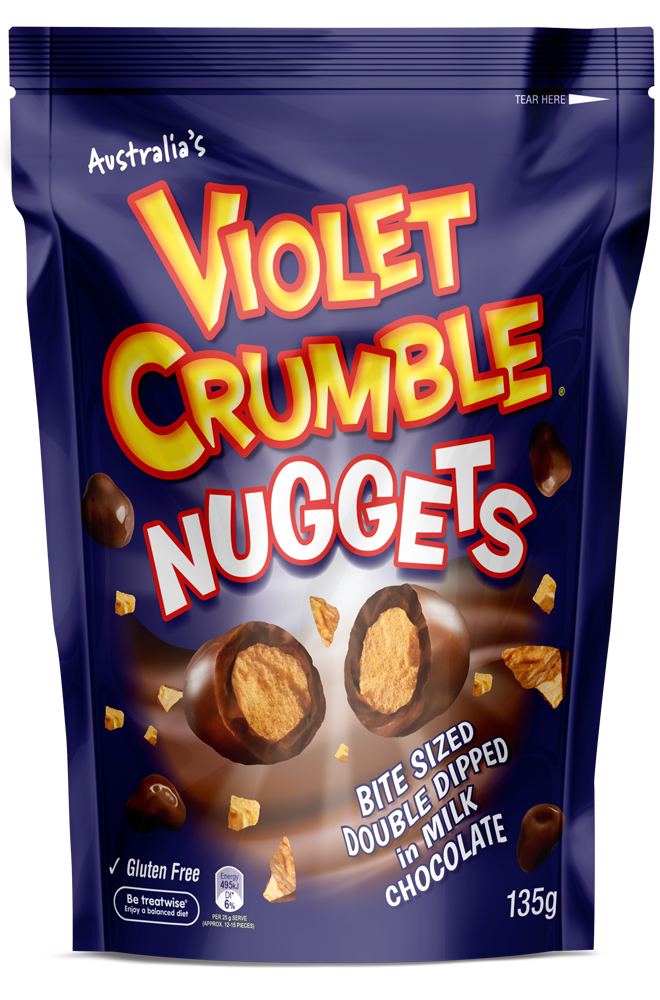 Nuggets are one of a number of new Violet Crumble formats released by Robern Menz.

“There’s no question that those nostalgia brands we’ve grown up with have done well during COVID and we’ve seen that – you think about that period when we were all stuck at home and there was a lot of chocolate bars and comfort food being eaten on couches.

The success of Violet Crumble has not come at the expense of the company’s own honeycomb brand, which it ironically launched when Nestle stopped producing Violet Crumble cubes in a share bag format in the 2000s.

Bumbles Choc Honeycomb uses a different recipe to Violet Crumble and continues to be sold in major supermarket and variety stores nationally. It is also exported to a number of countries including the United States and Japan.

Sims said Robern Menz was able to use its contacts to begin exporting Violet Crumble to the United States and had been working with AusTrade for the past nine months on developing other export markets, which it expects to announce soon.

He said there were also opportunities in several other countries where Violet Crumble was sold through the “grey market” by distributors who sourced the product from Australian wholesalers but the US was the main target.

“It’s a market that loves its candy, it is a fairly unique proposition over there, it’s competitive from a price point of view, it’s US compliant and has a long shelf life.

“The opportunity is there – you’ve only got to jag a Walmart or a Target in the United States and it just takes it to a completely different level.”

“We heard it was the former Philippines president’s favourite chocolate bar,” Sims said.

“So we headed up there and met with the major importers and retailers and we realised that Violet Crumble was a thing, people knew about it, people wanted it and they’d been buying it even though we had no idea how it got there.”

The Violent Crumble was invented in Melbourne in 1913 by jam-maker turned chocolatier Abel Hoadley.

Hoadley’s Chocolates, which was later bought by Rowntree in 1972 and then Nestle in 1988, also introduced the Polly Waffle bar in 1947. The Polly Waffle was a combination of chocolate, wafer and marshmallow and like the Violet Crumble developed somewhat of a cult following in Australia.

Robern Menz bought the rights to the Polly Waffle in January 2019, a decade after Nestle stopped making the bars.

“The two brands seemed to be intrinsically linked – it was quite bizarre – but it became such a thing so we started a conversation with Nestle about buying the brand.”

The company is working to bring it back and received a $1 million Australian Government grant in April from the Modernising Manufacturing Fund towards the $5.2 million project.

But unlike the Violet Crumble sale when the production line was shipped from Nestle’s Melbourne Kit-Kat factory to Adelaide and immediately installed to keep orders filled, the ageing Polly Waffle line was junked long ago.

Sims said most of the parts for the new Polly Waffle line would be sourced from Australia but some specialised components would need to be designed and made overseas, slowing the process because of COVID-19 travel restrictions. 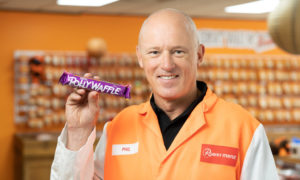 Phil Sims says the re-launch of the Polly Waffle will be another important milestone for Robern Menz.

He said the Polly Waffle would now not be back on shelves until late 2021 or early 2022.

“We bought the brand, got the recipe and got the process knowhow as part of the purchase but there was no production line so we’ve gone about designing our own production line, which will be highly automated and fairly bespoke with respect to producing the Polly Waffle.

“We have spent 18 months designing this production line that is about 120m long with 60-70 pieces of equipment that all have to work together.

“Our goal is to replicate the product exactly because there is an army of very passionate people out there who want to see it back and there’s an expectation that it will match what it used to be.

“That’s a challenge in itself because it’s been over 10 years since anyone has even eaten one.”

The Polly Waffle grant came with a promise to employ an additional 38 staff, which will take the Robern Menz workforce to more than 140.

Sims said purchase orders for sections of the production line would be placed in the coming months but travel restrictions were causing the greatest delays.

“The reality is we probably won’t be heading overseas until next year so that holds up part of it,” he said.

“Some of these pieces of equipment will take nine months to make – it’s not stuff off the shelf, it’s designed specifically for us.

“People are probably a bit frustrated and are starting to say ‘where is it’ but the product hasn’t been in the marketplace for 10 years and we’ve got to get it right.

“So it’s about making sure we meet those expectations and if that takes a bit longer to achieve then so be it.”

The Robern Menz story dates back to 1850 when Prussian immigrants Johan and Magdelena Menz began a baking business in Wakefield Street in Adelaide.

They developed the Yo-Yo and Bush Biscuit, which later achieved national distribution through Arnott’s, and started producing confectionary including Crown Mints in 1892.

The company was sold to major biscuit manufacturer Arnott’s in the 1960s and the confectionary part of Menz sold to Robern in 1992 When Campbells Soup bought the Arnott’s biscuit business.

Sims and his brother Richard are the fourth generation of the Robern business started by their great grandfather Walter Sims.

Walter opened his first of four Serv-Wel stores in the Unley/Wayville area of Adelaide in 1908. The difficulty of accessing quality dried fruit prompted Walter to start a dried fruit business of his own in 1926.

He named the business Robern in honour of a family friend, Robert Burnley, who had died aged 14.

Walter’s son Edgar got out of retail and built up the fruit business from the late 1930s.

“We did dehydrated vegetables for the Allied Forces in World War II as our part of the war effort and he really grew that business to six or seven factories and Angas Park (in the Barossa Valley) was the best known one,” Sims said.

“My father (Grantley) started working in the business in the 1960s but when Britain joined the EU in 1973 we lost so much business when Australia’s preferential duty rate was lost overnight.

“We had a fair exposure to canned fruit back then and the demand dried up pretty quickly and we went into some major contractions.”

Grantley set up a glazed fruit business and began making fruit-based confectionary such as Apricot Delight in the late 1970s before acquiring some chocolate-making equipment.

Robern’s first brush with Violet Crumble came in 1985 when Grantley bought the honeycomb line out of the Rowntree Hoadley factory in Adelaide, when the company decided to consolidate all production in Melbourne.

“We bought most of the Violet Crumble line and we started producing honeycomb and we started supplying the bulk market and private labels,” Sims said.

“Through the ’90s and 2000s Violet Crumble started becoming less of a priority for Nestle and they just focused on the bars. After they’d exited from the cube product in bags in the 2000s we launched our own product in that format and it’s been in ever since.

“We got into the honeycomb manufacturing through buying their equipment and then when the Violet Crumble opportunity came up from Nestle they approached us.”

Sims has been CEO since 2001 and joined the family business in 1992 when Robern bought Menz. Richard, the company’s chief operating officer, came on board a couple of years later.

Robern Menz moved from Stepney to its current 2ha location on Glynburn Road Glynde – the former Gibbs Pies factory – in 1995.

The 1990s and 2000s were a period of organic growth for the company, building sales of its much-loved FruChocs and Crown Mints brand.

While the Violet Crumble 50-gram bar has become the company’s biggest selling item, FruChocs are still its biggest money spinner within South Australia.

“When you look back at milestones in the business, the purchase of Menz from Arnott’s was really important because it gave us the iconic FruChocs and Crown Mint brands in South Australia that we’ve continued to invest in and develop over the past 25 years,” Sims said.

“I think Violet Crumble will be the same. It’s only three years down the track but our pay back is there already and there’s a lot more growth and opportunity for the brand in Australia and overseas.”

Despite some previous attempts, Robern Menz have not been able find success for FruChocs beyond South Australia’s borders.

Sims said there would be a new opportunity for the chocolate fruit balls nationally because of the distribution channels opened up by Violet Crumble.

“Our focus has really been on Violet Crumble and now the buyers want to talk about Polly Waffle so maybe it happens after Polly Waffle,” he said.

“FruChocs and Crown Mints are iconic but just in South Australia so the opportunity now for the business is to take that same strategy Australia wide with the iconic national brands of Violet Crumble and Polly Waffle.

“We know with Polly Waffle there is enormous interest from all of our major accounts and it’s an iconic brand, there’s strong consumer interest and we have to model what those expectations are and we are starting to have those conversations now.

“Will it be as big as Violet Crumble? I think in Australia it can be – but Polly Waffle was never exported as far as we know so it will have a fair bit of catching up to do internationally.”