What next but graphene safety boots 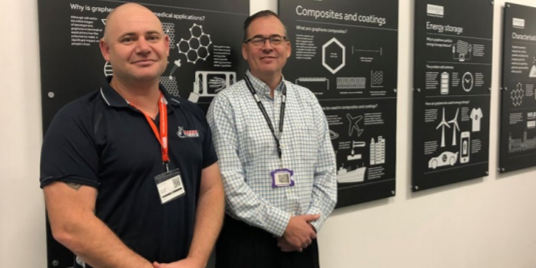 The companies showcased the new boots, which incorporate the carbon-based nanomaterial in thermoplastic polyurethane (TPU) boot soles and foam innersoles at a presentation at the company’s commercial graphene facility at Henderson in WA.

The companies have developed a unique range of boot component technologies that have user benefits with the potential to ‘revolutionise the safety boot market’.

First Graphene will supply its graphene powders exclusively to Steel Blue for footwear in Australia and New Zealand.

The boots were one of a number of innovations incorporated in First Graphene’s financial results, which showed revenues for the first half of the year of $82,831 and a net operating loss after tax of $2.17 million.

In August the company raised $5.6 million through the early exercise of options giving it a strong working capital position to pursue its R&D activities.

In one development the company’s Armour-GRAPH bucket liner in service with a Pilbara iron ore producer is performing well after 24 weeks of use.

The anti-wear liner ‘shows no sign of advanced wear or scalloping as would normally be experienced with the liners currently used in industry after 24 weeks of use’, according to First Graphene.

The company has now installed a second bucket liner at the Pilbara site.