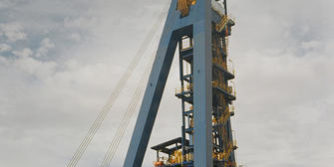 Winder Controls Australia has commissioned a new Number 1 winder and Tower Mounted Friction Winder at Glencore’s Cobar copper mine.
Work at the CSA Mine involved the removal of old equipment, remanufacture of structural elements and the lifting of the new hoisting machinery 52 metres above the ground.
Motor, gearbox and hydraulic power pack were also lifted into position, installed and commissioned.
Winder Controls, a subsidiary of the German SIEMAG TECBERG group, engineered and manufactured the hoisting equipment in Australia.
The Cobar underground mine produces more than 1.1 million tonnes of copper ore and 185,000 tonnes of copper concentrate annually.
Australian mining technology and equipment has been a success story of local manufacturing, and was given a kick start with massive investments made in the recent mining boom.
Photo: Winder Controls.