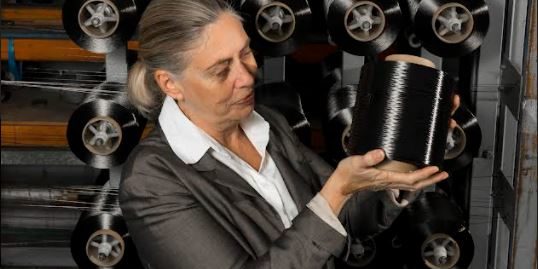 Today, our special editorial series celebrating International Women’s Week profiling women leaders in composites, turns to Genelle Coghlan, a ‘materials geek’. She loves the art of engineering purpose and performance into roll goods, tapes and braids, and pushing the limits of fibre compositions. By Kerryn Caulfield.

Genelle Coghlan is a successful serial entrepreneur with many years of business, finance and manufacturing experience in Australia and internationally, with turning Colan Australia into a profitable company her greatest achievement.

She became managing director of her family company Colan Australia in 2004 after a successful career in tourism.

During the 18 years since that time, while offshore competition has forced over 60 Australian textile mills to close their doors, Coghlan has managed to turn Colan from a loss-making company into a smaller but profitable venture.

Coghlan, originally a lawyer, said: “When I took over Colan, the textile industry had an average rate of government assistance of 26 per cent – in the form of direct budget programs and tariffs.

“When this support was reduced to 5 per cent and offshore goods flooded in, textile companies like ours simply went to the wall.

“My strategy was to remain niche and be the first to innovate through fibre properties and fabric construction.”

Colan Australia has specialised in weaving industrial textiles from technical fibres since it was founded in 1954.

“My father in the late 1950s was a pioneer of the industrial textile industry in Australia. He envisioned the growth of Australian manufacturing through technology transfer and introduced the manufacturing of woven fibreglass fabric into Australia.”

Close to seventy years later Colan, now with Coghlan as managing director, is still at the forefront of industrial textile manufacturing.

The company produces a raft of fabrics for composites and protective and safety applications and is now Australia’s only manufacturer of advanced technical fabrics. Remarkably, it is also the only mill in Australia with carbon fibre weaving capability.

Coghlan admits to loving the thrill of R&D for new products and performance, be it flame retardant fabrics for use in protective clothing, ballistic fabrics used in bullet proof vests for military personnel protection, panels for military vehicles or high performing surfboards, storage tanks, pipes and boat hulls.

She said: “Developing fibres, yarns and textiles for performance applications is as fascinating as it is rewarding. Our technical fabric and tape range features exotic fibres like Basalt, Aramid (Kevlar) and Innegra, all of which we brought in early.”

In recent years Colan developed and patented a new synthetic polyacrylate fibre – PCA – that has exceptional high temperature resistance and moisture management properties. This unique fibre is being made into bush fire blankets for our rural fire services.

“With the exception of a project with CSIRO, we do all our own research and development without outside assistance. It is frustrating to see government grants go to others to learn what we already know.

“For most of my career in manufacturing, I’ve been the only woman in external R&D meetings and there have been too many occasions when someone else has painstaking explained my own product and equipment to me, assuming I know little.”

Coghlan has also been successful in developing export markets for both fabrics and product.

“We engineered and manufactured textiles that were made into flak jackets to protect our soldiers during the East Timor Crisis of 1999. One of the protective measures for our defence force in Afghanistan was also anti-flash protective hoods,” she said.

“I came into this company knowing that markets mature, shift and change.

“As a lawyer, I understand that business is a contest – a contest for influence and competition in the form of price, quality, design, sales, location, and almost every business process. For Colan, success has come from remaining niche, and being the first to innovate.”

Initially it was used as a sheath to cover wooden boats. The technology and application skills developed to a point where fibreglass could be used for full fibre moulded hulls and subsequently adapted into the defence, industrial, transport, infrastructure and sports and leisure manufacturing markets.

Another early product line was the acoustic woven material called ‘grill cloth’ that lined the speakers of radiograms and televisions that were made in Australia by PYE, Phillips and Amalgamated Wireless Australasia Ltd or AWA, to name a few.

“My father engineered and manufactured the fabrics to absorb vibration and move synchronously with the sound waves.”

The Huntingwood site in NSW is Colan’s third since the company was founded.

The mill was purpose built for Colan’s multiaxial fabric that was developed over 20 years ago for the Huon class Minehunter built for the Royal Australian Navy at Australian Defence Industries shipyards at Newcastle.

The facility optimized the flow of processing raw materials into finished products and housing textile manufacturing equipment that was produced for a myriad of end-uses, including Formula 1 cars, naval vessels, refrigerated semitrailers, caravans and surfboards.