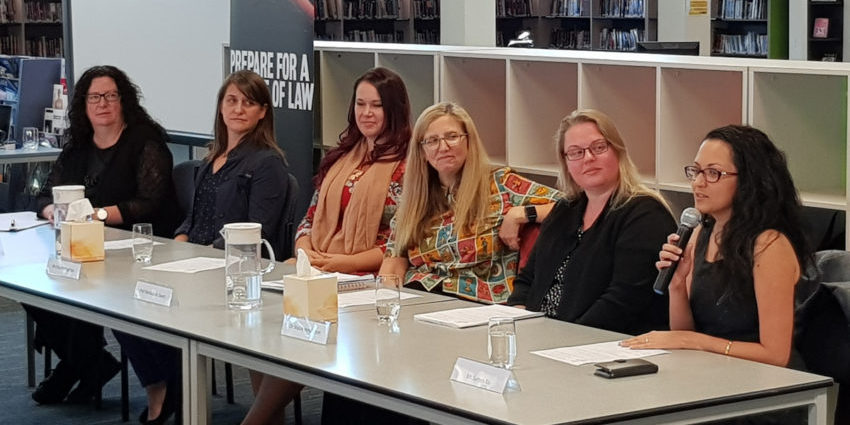 The roles of women in the space industry are often overshadowed by their male counterparts.

That’s the motivation behind a series of Women in Space events over the coming days ahead of Space Week in South Australia.

“We know from movies like Hidden Figures that there have always been women working in the space industry but their voices are not sufficiently heard,” said Women in Space organiser and Adelaide Law School Dean Professor Melissa de Zwart.

“There are a lot of women working in diverse areas of the space industry but there’s often a lot of focus on what the males do – if you go to a conference for example they’ll have a whole panel of men so we really want to redress that balance.”

The first of three Women in Space events took place at Hamilton Secondary College in suburban Adelaide this morning when a panel of six leading space industry women ran a workshop for about 80 high school students from across Adelaide.

The group, which includes American participants Elsbeth Magilton from the University of Nebraska College of Law and Dr Laura Grego from the Union of Concerned Scientists, will also host a public lecture and networking event at the University of Adelaide tonight and a full day academic forum at Adelaide Law School tomorrow.

Professor de Zwart, who is also a Space Industry Association of Australia board member, said the growth of the space industry in South Australia and the recent establishment of the national space agency in Adelaide had generated a lot of interest in space as a driver of economic growth.

“There are opportunities now for people who may not have traditionally considered a career in space because there are now more pathways to get there – everyone’s interested in space now,” she said.

“We can also show through our two visitors who are here from the US that South Australia might be a remote place but we have these great relationships with people who are doing cutting edge work overseas so you don’t even have to leave South Australia to benefit from those international partnerships.

“So the purpose of doing this was to highlight the voice of women but particularly the activity today is about reaching out to high school students to say that there’s a diversity of experiences and jobs and opportunities in what we call the space industry.”

The space industry in South Australia received a further boost in April when it was announced the national SmartSat CRC would be headquartered at the University of South Australia. The CRC brings together an A$190 million cash and in-kind investment from 99 industry and research partners with a $55 million pledge from the Australian federal government over seven years.

SmartSat CRC CEO and Managing Director Andy Koronios said that as Australia’s newest large-scale space organisation they had taken the opportunity to ensure that not only their science was cutting-edge but their governance was also best practice and had a balance between geography, generations and genders.

“We are looking to help the new generation of space scientists and engineers, which is primarily not as gender balanced as it should be,” Koronios said.

“If you have a balanced workforce it’s more profitable because you have many more of the best brains.”

Professor de Zwart asked students at this morning’s workshop what a day without satellites would be like to get the young people thinking about space.

“There’d be no communications – no Uber Eats, no Google Maps, no EFTPOS banking, no Snapchat. You guys couldn’t talk to each other,” she said.

“So it’s a pretty important global issue to make sure that space is a pretty safe and secure operating environment so that everybody in the world can access those services.”

Flinders University space archaeologist Dr Alice Gorman told the students that as a child she could not decide whether she wanted to be an archaeologist or an astrophysicist and had no idea she would end up doing both.

“Things are changing pretty rapidly at the moment and Australia’s looking to really ramp up its involvement in the space industry and space science,” she told the workshop.

“As an archaeologist currently working in space I think that shows that you don’t all have to be engineers or physicists to become involved in space.

“I see a role for creativity and social sciences very much in the future and in this room I hope there are going to be many people who find different ways to intersect with this exciting human endeavour.”

South Australia has been instrumental in helping establish the nation’s space industry to reach this goal. It is home to major Tier 1 defence companies and several emerging startups, including Myriota and Southern Launch, which is establishing a launch facility in the state’s west that was given major project status this month.

Defence Innovation Partnership Associate Director Sumen Rai grew up with a love of space from science fiction movies but studied film making and teaching because of a lack of opportunities.

However, her work organising the first NASA Space Apps Hack-a-thon in Adelaide in 2012 and on future industry planning with the South Australian government opened her eyes to the emerging space industry.

“All of a sudden I realised that I could be a part of growing the space industry in South Australia and that was incredibly exciting,” Rai told the students at Hamilton Secondary College this morning.

“One of the question that continues to influence me today is the big one of how climate change is going to impact us. Space is one of the key ways that we understand what’s happening on Earth because the viewpoint you get up there from satellite images you can’t get on the ground.

“So going into the future there’s going to be so much work not just putting stuff up into space but also in learning how to understand and manipulate that data, building the satellites and the legal and governance structures.”