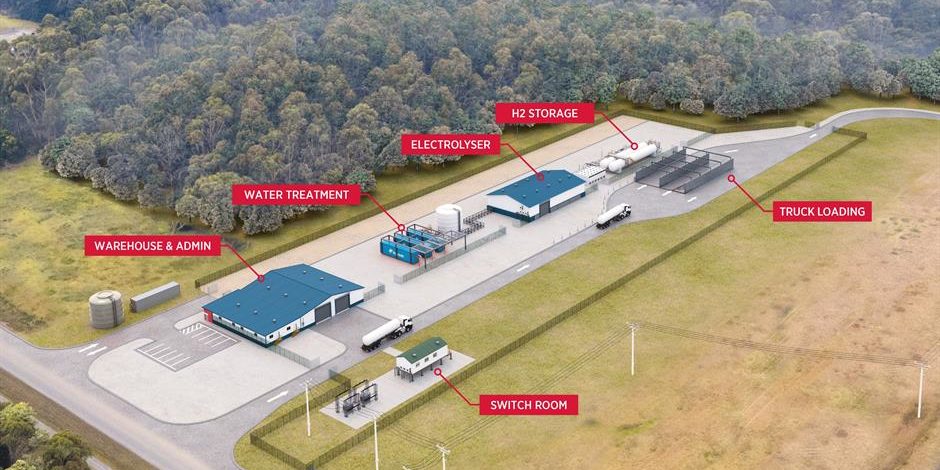 Oil and gas producer Woodside Energy has begun searching for a contractor to design and build a renewable hydrogen power plant in Tasmania, one of two green hydrogen projects it has been pursuing that may lead to bulk export.

Global oil and gas sector website Upstream reported Woodside had hosted an expressions of interest briefing for 25 companies interested in bidding to build the H2TAS pilot plant (pictured) in the industrial zone at Bell Bay.

The proposal from Woodside and Countrywide Renewable Energy involves a 10 MW pilot project producing 4.5 tpd of hydrogen for domestic use, targeting the transportation sector.

Based on Tasmanian hydro sources, advancing the development is big news for the hydrogen industry which is seen as a replacement for export to Asia of polluting fossil fuels such as coal and gas.

It is envisaged green hydrogen from these projects will be combined with nitrogen to make ammonia, enabling shipping as a stable liquid at -30 degrees.

The company is also participating at the early stage Badgingarra Renewable Hydrogen Project in Western Australia which will use renewable power to produce hydrogen for use in power generation, transport and industrial applications.

Woodside is also active with potential customers for hydrogen shipments in target countries Japan and Korea.

And it has invested in Korean consortium Hydrogen Energy Network (HyNet) with Korea Gas Corporation (KOGAS) and Hyundai Motor Co. to study demand and potential for hydrogen.

Woodside’s projects have been shortlisted for funding from the Australian Renewable Energy Agency’s (Arena) $70 million Renewable Hydrogen Deployment Funding round.