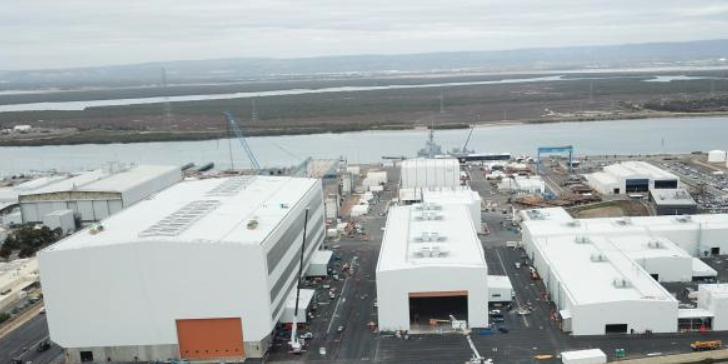 Only some river-side cladding work remains to be done on one of the largest buildings ever constructed in Australia – the Outfitting and Ship Erection Hall at the Osborne South shipyard on the banks of the Port River in Adelaide.

The hall – 187 metres long, 87.4 metres wide and 50 metres high (main picture, at left) – being built as part of the Osborne South Development Project will be used to construct 12 Hunter class frigates.

Constructed in sections on the ground from 4,000 tonnes of steel, the building is fitted with two large gantry cranes capable of lifting 200 tonnes.

Australian Naval Infrastructure reported that the $535 million shipyard upgrade, due to be handed over to ASC Shipbuilding this month, was in its final stages.

Installation of the copper-coloured ‘megadoors’ and a so-called ‘gigadoor’ are also nearing completion.

When complete the yard will be the most technologically advanced in the country, and will digitally enabled from day one.

Also underway at the Osborne Naval Shipyard since September is the next stage of expansion – the Osborne North Development Project.

Early piling and foundation works are underway on a new submarine yard as apart of the $50 billion Attack class submarine construction programme.

Phase 2 is still in the planning and design phase.