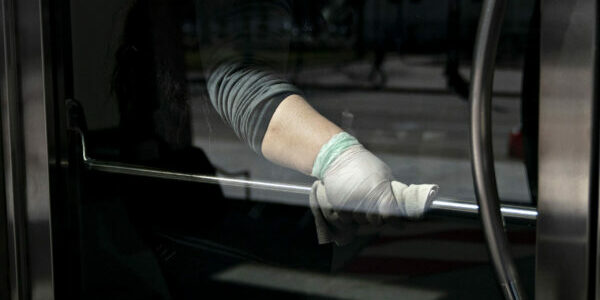 A team of Australian researchers have developed a world-first sprayable coating effective against the spread of both viruses and bacteria, and which could be commercially available within three years.

The coating worked over a “sustained period” and could be applied in the same way as spray paint, according to a statement from the University of Sydney on Thursday. The “mechanical stability and surface energy” of the coating was tested, and it was also subjected to high concentrations of bacteria and viruses, submerged for extended periods of time and deliberately damaged.

(Their paper, published in the journal Advanced Science, can be accessed here.)

“We have identified the mechanical processes underpinning how the spray works and quantified its effectiveness in different environments,” said Professor David R. Nisbet, one of the authors.

“For this study, we tested metal surfaces. However, in the past we have shown the spray can be applied to any surface, for example, blotting paper, plastic, bricks, tiles, glass and metal. Our coating successfully prevented up to 99.85 per cent and 99.94 per cent of the bacteria strain growth. We also saw an 11-fold reduction in virus contamination.”

The coating is described as working in two ways: repelling air-borne pathogens by an air-filled barrier, as well as killing them through microscopic materials.

“Like a lotus leaf, the surface spray creates a coating that repels water. Because the pathogens like to be in water, they remain trapped in the droplets and the surface is protected from contamination. If this mechanism fails, a secondary burst of ions is triggered by carefully designed nanomaterials dispersed in the coating,” said co-lead author Professor Antonio Tricoli from the University of Sydney.

The solution involved a five-year collaboration across multiple universities and grant support from the National Health and Medical Research Council and the Australian Research Council.

According to the statement, an unnamed startup company has been formed to take the novel coating to market – where it could offer multiple benefits over disinfectants and newer methods to control pathogens – and it could be available “potentially within three years”.