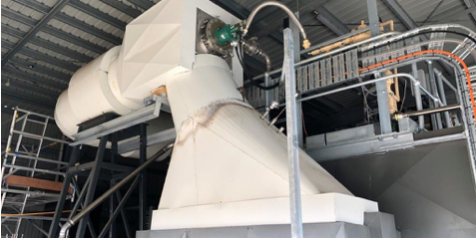 The system is the first in the world to store energy from biogas created in the waste treatment industry in molten silicon, recovering the energy later to generate electricity.

GAS-TESS is the result of an approach from water and wastewater treatment business SA Water to 1414 Degrees to develop a thermal energy storage system (TESS) charged with gas, rather than electricity.

The GAS-TESS pilot plant was integrated with SA Water in November, with the TESS plant cooled for two weeks to allow the energy recovery system to generate for longer periods.

A biogas co-firing burner (pictured) was installed and commissioned in January, supplying heat to the plant and heating the silicon storage to operating temperatures.

1414 said in a statement: “The electrical generation module was supplied heat but the turbine output was below performance targets.

“Our engineers are in daily contact with the manufacturer of the turbine and heat exchanger to resolve the issue as soon as possible.”

In other news 1414 reported it had made first contact with Aurora Project stakeholders in the Port Augusta region.