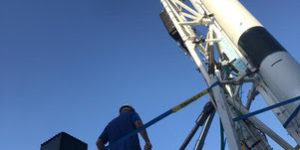 The rollout of the new rocket, reported by @AuManufacturing in February, has been followed by a period of increased activity for the company.

Gilmour Space CEO, Adam Gilmour said: “We have spent the last few months integrating new software into our mobile launch system, and expect to be rolling out very soon for the test launch.

“We grew our talent pool by over 50 percent, improved gender diversity, moved our team to a larger facility on the Gold Coast, and continued our STEM outreach and engagements across the country.”

Gilmour yesterday celebrated the third anniversary of the launch of its first rocket from a site in Queensland, which reached a height of five kilometres above the Earth.

The launch was one of the world’s first successful flight tests of a privately-developed hybrid rocket using 3D printed rocket fuel.

Gilmnour said: “With your help, we will continue to push for an orbital launch site in Australia, particularly in Queensland, which we believe is very well situated for most orbital launches.”

In April, ‘Access to Space’ was added as a new national priority area for the year-old Australian Space Agency.

“It goes without saying that our team is very excited to be part of this next space revolution, the one that will firmly establish humanity as an active participant in our solar system and beyond.”