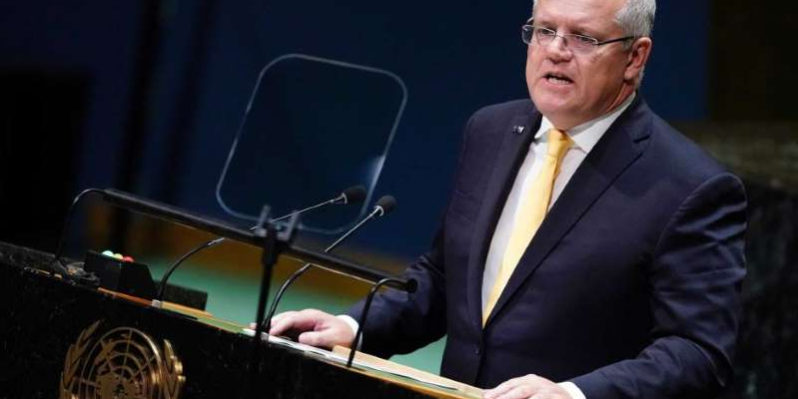 During a speech that cited the Ellen Macarthur Foundation’s estimate that there could be more plastic than fish by weight in the ocean by 2050, the prime minister was unapologetic on Australia’s action in combating climate change so far, though it would lead “urgent action” to combat illegal fishing and ocean waste in the Pacific.

“On his visit to the United States and to the UN Mr Morrison has concentrated heavily on plastics pollution and waste recycling to protect the environment and said environmental challenges are ‘not just climate change,’” according to The Australian.

“Industry led mechanisms for investing in new recycling technologies and mitigating plastic waste in rivers, beaches and oceans on a global scale are essential,” the same paper reports Morrison as saying.

Prior to his address, the prime minister told reporters that, “What needs to be done when it comes to plastics recycling, and for that matter, any area of waste management, is it needs to be commercially sustainable as a model.

“We don’t want to see you know, taxes, and large levels of state intervention, and massive summits, and these sorts of things.

“What we want to see is industry leadership, and support for that leadership, and research, and design, and the identification of new products and markets, and how we can facilitate that, so you get a commercially sustainable waste management operation.”

According to the National Waste Report 2018, “only about 12% of waste plastics are recycled” based on a 2016-17 figures. This compared to 90 per cent for metals, 60 per cent for cardboard, and 27 per cent of hazardous waste.

Australia and much of the rest of the world have been impacted by an effective ban on recyclable plastic imports by China in 2018. In the last year, nations including Indonesia and India have rejected contaminated exports from Australia.

Morrison’s US trip took in a trip to a paper and packaging recycling facility in Ohio owned by Australian billionaire Anthony Pratt’s Pratt Industries. According to The Sydney Morning Herald this “appears to have confirmed to Mr Morrison that commercial operations can make recycling profitable and reduce the need for government subsidies.”

As the SBS reports, some climate scientists have criticised the PM’s focus on plastic recycling as a distraction from the issue of climate change.