Launch of our new editorial series – excellence in maritime manufacturing 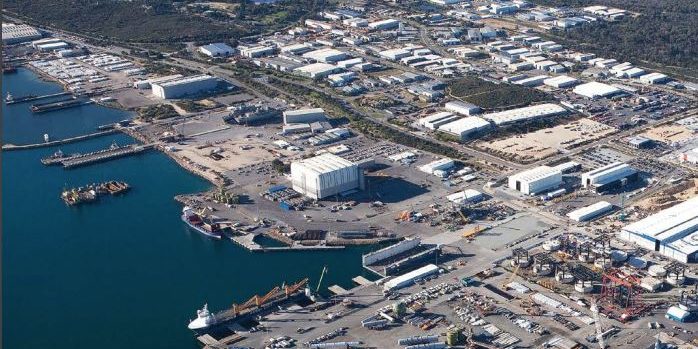 Today @AuManufacturing launches its new editorial series Excellence in maritime manufacturing coinciding with the Indo Pacific 2022 International Maritime Exposition. Maritime industries are booming as Australia builds new naval vessels at a rate unprecedented in peacetime. In a separate story Peter Roberts tours the Osborne shipyard in Adelaide, while here he sets the scene.

Australia’s continuous naval ship construction programme is getting into full swing with ships being built at a rate unprecedented in a truly continent-wide effort.

Naval engineers at BAE Systems in Melbourne are supporting the detailed design of nine Hunter class frigates to be built at the brand-new Osborne naval dockyard in Adelaide.

The first prototype ship blocks are being assembled at Osborne as two offshore patrol vessels designed to give continuity of work to the yard’s workforce are nearing completion on the hardstand of the shipyard’s common user facility.

ASC will replace the propulsion systems, diesel motors, generators, power conversion and distribution systems as well as carrying out a range of hull assessments and upgrades. The company will also integrate this new equipment into the existing command and control system.

To the north of ASC work has been paused on building another vast shipyard originally designed for France’s Naval Group to build Attack class submarines for the navy.

With that contract abandoned at a reported cost of $5.5 billion, the federal government has moved to secure more land at Osborne for an even bigger yard capable of constructing nuclear powered submarines now being discussed under the tri-nation Aukus pact.

But while $1 billion is being invested in new facilities at Osborne, an even more ambitious expansion is planned and underway at the Australian Marine Complex at Henderson, on Cockburn Sound south of Perth (pictured).

While Adelaide is envisaged as the site for construction of larger, more complex vessels, Perth is the small ship centre with 53 vessels to cost $21 billion already announced, topped by a federal government election promise to build a $4.3 billion drydock at Henderson.

At Henderson Civmec and Luerssen Australia are building 10 Arafura class offshore patrol vessels (OPVs) – the first two are being built in Adelaide – with the total programme to cost $3.6 billion.

The government has also selected a variant of of the OPVs for eight new mine hunter and hydrographic ships under the $5 billion project SEA 1905 phase 1. These will replace Huon class vessels.

In April the federal government ordered an additional two Evolved Cape-class Patrol Boats (ECCPB’s) to be built by Perth international shipbuilder Austal for the Royal Australian Navy, at a cost of $124 million.

The two new vessels are in addition to the six Evolved Cape-class Patrol Boats that are currently being delivered by Austal to the navy.

Finally at the BAE Systems yard at Henderson, three ANZAC frigates are currently out of the water undergoing a capability upgrade.

All this construction in Perth and Adelaide adds up to a massive nationwide naval maritime engineering and construction effort.

It is in this context that the 12th Indo-Pacific 2022 International Maritime Exposition is being held at the Sydney International Convention Centre from 12-12 May.

With the exhibition is showcasing many of the most advanced technologies and systems available anywhere in the world, @AuManufacturing will provide daily coverage for the next two weeks.

@AuManufacturing and the Australian Manufacturing Forum networking group would like to acknowledge the kind support of our sponsor BAE Systems Australia, who have made this coverage possible.

BAE Systems Australia has operated in Australia for 65 years, with its history spanning activity at the Woomera rocket range in 1954 to being selected in 2018 to deliver the next generation of advanced anti-submarine warships, the Hunter class frigates, in Adelaide.

The company delivers a wide range of advanced defence, aerospace and security solutions from suppling the Hawk Lead in Fighter and manufacturing components for the F-35 joint strike fighter, to the Australian Nulka active missile decoy and Jindalee Operational Radar Network (JORN).

Today the company contributes $1.2 billion to Australia’s GDP each year.