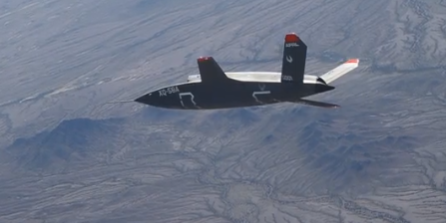 The US Air Force has launched a competition to develop AI software to control groups of highly capable unmanned aerial vehicles (UAVs) flying in formation with conventional jet aircraft such as the F-35 joint strike fighter.

The USAF intends to let a number of development contracts for the software, known as Skyborg, according to a report in Flight Global magazine.

While the software would likely be suitable for use in the Loyal Wingman Airpower Teaming System UAV being developed in Australia by Boeing and the Royal Australian Air Force, it also raises the specter of competition for the Australian craft.

A US competitor, the Kratos XQ-58 Valkyrie (pictured), is also in the running to ultimately be ordered by Australian and allied air forces

Kratos says: “The XQ-58A delivers a combination of long-range, high-speed, and maneuverability, along with the capability to deliver a mix of lethal weapons from its internal bomb bay and wing stations.”

The two aircraft look remarkably similar, however while Kratos has already flown its prototype, three Australian Loyal Wingman prtotypes are not due to fly until leter this year.

The report suggests the USAF may buy more than one UAV, and also raises the prospect of Australian-developed software being used on both aircraft.

BAE in Adelaide has capabilities in UAV control in groups, known as swarms, and supplies the launch control software for the Evolved Sea Sparrow Missile now in service with the US Navy.