Marketing for manufacturers — Posting to the world from rural Victoria A deceptively simple Australian invention is winning global interest from farmers. An important part of its success is Nicole Davidson, who threw herself into the role of Davidson Engineering’s Marketing Manager. In this part of our Marketing for manufacturers series, Brent Balinski speaks to Davidson about her approach to running the company’s online presence.

When we call Nicole Davidson of Davidson Engineering it is 2:20 in the afternoon, and she had fielded three customer calls since the turn of the hour, one of which was an order for 100 boxes of Davo’s Fencing Clips.

Enquiries to the business in Casterton, about 350 kilometres west of Melbourne, come from all over the world. Callers are interested in an Australian invention that promises to take the hard work out of stapling fence posts, removing the hammering of staples with the drilling of clips.

After Nicole and son Jimmy returned to the house following a day of fence work in July 2017, with sore arms and banged-up thumbs, husband Rod went and designed a tek screw and wire brace solution. After a bit of looking around, he found the system was a world-first.

It has since won prizes such as top award at Sheepvention 2018, as well as a rapidly-growing new line of work for the long-established fabrication and fitting and turning company.

“This wire bending caper is just a new thing for us in the last three years, but we’ve been in business for 30 years,” Nicole Davidson tells @AuManufacturing.

About three years ago she decided that they needed to start telling their story on social media.

“I thought, ‘well somebody’s got to do it.’ I learned about Facebook when our kids became teenagers and I wanted to stalk them. [Laughs] Absolutely no experience whatsoever, but we just know that as a couple we work really well together and we were both really passionate about this product, so we wanted it to be us that was doing it,” she explains.

“I thought, ‘we’ll try this Facebook thing first because it’s cheap and easy. And it’s just worked beyond our wildest imaginations.’”

That report notes 65 per cent of the country’s manufacturers have a web presence, and only 40 per cent maintain a social media account. It also notes Davidson Engineering is becoming “wildly popular” on social media, thanks to Nicole’s efforts.

She does not bother with Twitter, Linkedin, Tiktok or any of the other major platforms. Just Facebook. Where did she learn her winning approach? It’s a mix of instinct and observation, and of learning by doing.

Each post (they often receive more than 60 likes, not bad at all for a small manufacturer) is shared to over 100 groups. Many of these are buy/sell/swap pages in rural areas, with a few Australian made-themed ones: “where I think our buyers might be lurking.”

“Some of those pages got sick of me after a while and asked me to stop hounding them, so I bowed out gracefully,” she says, again with a laugh.

Posting has replaced agricultural field day trips — following 15 of them for the company in 2019 — which are currently off due to Covid.

“As soon as that happened, we thought, ‘Trade shows are just not going to happen. We can either sit back and cry about it, or we can just get on with doing whatever the alternatives are and ramp up Facebook [activity] a bit more,” she adds.

Davidson’s posting style is similar to her conversational style: amiable without being frivolous, economical, and — two words probably overused by marketers — engaging and authentic. There’s often a testimonial and a small photo set alongside text.

One example of the text from an update:

Kevin was one of our original customers.  He keeps coming back time and again.  I think he may be onto something!!

Proudly made near Casterton, Victoria and posting to the world.

A major boost came their way mid-2020, when their fencing clips were featured in a positive review by Tim Thompson, a popular “farm skill how-to” Youtuber with 34,000 subscribers. (See video below.)

“His audience is our audience,” says Davidson.

“Within hours of him launching his video, email enquiries and sales just skyrocketed,” with serious approaches coming from 10 countries in five days.

Business is growing, but there is a lot of headroom. 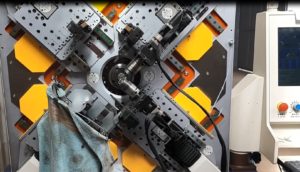 Only husband Rod, son Jimmy and two others are on the shop floor.

A CNC wire forming machine, assisted by a Manufacturing Modernisation Fund grant and which arrived in November last year, runs for just 10 hours a week at the moment.

Thanks to the new machine, which replaced an old CNC wire former that could only make one shape, the company has also begun producing components for two Australian fencing businesses.

A website is another step to be taken, if and when they can find a suitable builder. A rural focus and background is a must.

The company knows itself and its audience, and these cannot be compromised: “I just know that an urban builder that doesn’t have a genuine understanding of our audience will come across as patronising or ill-informed… we’re also keen to be working with a small rural business for the sake of small businesses in rural areas.”

Then there is building a distribution network.

“Our next goal is to be getting into retail stores around the nation. Which is happening one store at a time at the moment,” says Davidson.

“We’ve got half a dozen stores on board.”

@AuManufacturing’s Marketing for manufacturers series is brought to you through

the support of Whyte Public Relations and the Advanced Manufacturing Growth Centre.