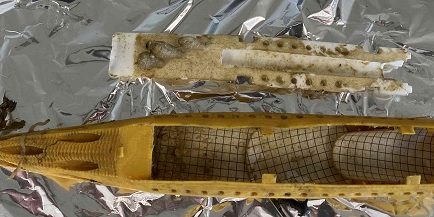 Monash University and others have developed a cheap 3D printed device able to detect the virus that causes Covid-19 in wastewater.

The device — dubbed the “Torpedo Passive Sampler” or “sewage submarine” — has been successful in detecting SARS-CoV-2 in wastewater at eight study sites, said the university, with early evidence showing its effectiveness at individual lot, suburb and city scale.

Passive sampling means the device is placed in a body of water for a known time, allowing time for pollutants to interact with the device. The sampler’s insides are held in a 3D printed shell.

“These results indicate that cotton buds, electronegative membranes and gauzes can be used as passive samplers of SARS-CoV-2 in human wastewater. This is the first proof of concept that one or more of these passive samplers could be prime candidates,” said lead author of the studies, Associate Professor David McCarthy of Monash.

According to a statement from the university, over 2,500 of the devices have been delivered to all Australian states and territories, as well as to New Zealand, Canada, the Netherlands. Samplers will also arrive in the USA and Indonesia soon.

The intellectual property for the samplers has been made open, with 3D printing files available now.

The team’s research can be viewed here.