More coal-fired power or 100% renewables? For the next few decades, both paths are wrong 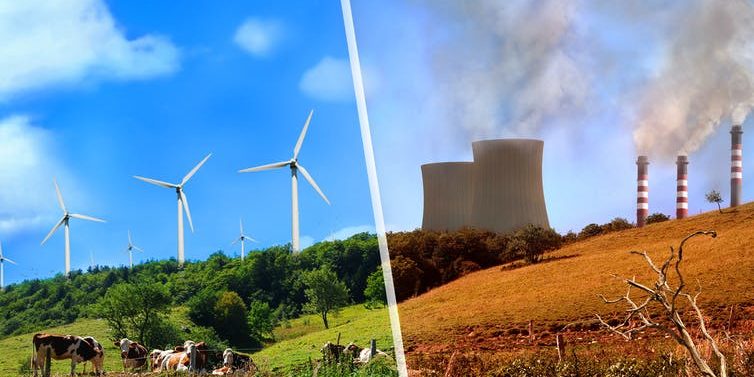 The big question facing Australia’s National Electricity Market is how to achieve net-zero emissions by 2050 without disrupted energy supplies or skyrocketing prices.

Some say coal-fired power will be needed. Others say 100% renewable electricity is the way to go. But our new report released today argues neither path is wise in the medium term.

It shows renewable energy – particularly wind and solar – can get us most of the way to net-zero. But as the renewable share approaches 100%, maintaining reliable supply will become very expensive.

The best approach for now is to target net-zero emissions. This will involve retaining a small proportion of fossil-fuel generation – namely gas – in the electricity mix over the next couple of decades. But it does not mean extending the life of existing coal-fired power stations, or building new ones.

A fork in the road

All state and territory governments have committed to achieving net-zero carbon emissions by 2050. Prime Minister Scott Morrison says achieving that goal is his preference, too.

That means the electricity sector needs to reduce the amount of greenhouse gases it releases to the atmosphere.

Most electricity customers in Australia, except those in Western Australia and the Northern Territory, are supplied by the National Electricity Market (NEM). It comprises electricity generators, transmission lines and other infrastructure to deliver electricity to customers, and a wholesale market where electricity is bought and sold.

The market’s coal-fired power stations are ageing. As the below graph shows, virtually all are scheduled to be retired in the next three decades.

Renewable energy is now the cheapest source of electricity, but it’s an intermittent form of supply – generated only when the wind is blowing or the sun is shining.

The question now is what technology mix – including fossil fuels, renewable energy sources and energy storage systems – the NEM should adopt.

The Grattan Institute developed a sophisticated economic model of the NEM to answer this question. We investigated the emissions, reliability and affordability implications of different future technology mixes.

The model tested each technology mix against nine years of hourly weather and electricity demand data across the NEM, adjusted for projected changes in future demand. It then computed the cost of supplying electricity with each mix.

The results are good news for Australia. A 70% renewable system looks to be about as affordable as maintaining a coal-based system over the long run, but with 70 million fewer tonnes of emissions each year.

The cost of doing this is extremely low – about A$7 for each tonne of emissions abated. This is less than the A$16/t the federal government pays for emissions reduction now via its Climate Solutions Fund.

Moving from 70% to 90% renewables would trim another 35 million tonnes of greenhouse gas emissions for less than A$40/t. This is still low-cost abatement. By comparison, the European Union’s carbon price rose to about A$67/t in March 2021, while Canada plans to raise its carbon tax to about A$181/t by 2030.

Transmission infrastructure is key to decarbonising the electricity sector.

To get to higher renewable shares, more transmission infrastructure is needed, for two reasons:

First, many sunny and windy places are located at the edges of the NEM states. If wind and solar plants were built there, transmission would be needed to connect them to the network.

Second, more transmission between NEM states would allow each state to export renewable energy when it has too much, and import when it needs more.

There are costs and benefits to weigh up here. Extra transmission infrastructure requires significant investment. However it would mean less generation infrastructure is needed in each state, reducing overall costs.

Our report shows at 90% renewables, the benefits of a more-interconnected NEM outweigh the costs to the tune of A$800 million or more each year.

Net-zero is more affordable than 100% renewables

The best information available today indicates climbing from 90% to 100% renewables will be expensive. This is mainly due to the challenge of balancing demand and supply during rare, sustained periods of low wind, low solar and high demand.

Gas is an ideal backstop for this challenge. Gas-fired generators are cheap to build but costly to run. These economics suit this problem nicely because they will be needed only infrequently.

Alternatives look more expensive. Hydrogen could very well replace gas as a backstop, but only if the cost of producing and storing it falls significantly. Carbon capture and storage (CCS) can work only in certain locations, and is much less economic if used infrequently. Batteries and even pumped hydro will struggle over rare, multi-day challenges.

Of course, gas is not a zero-emissions solution. To reach net zero efficiently, the lowest-cost option in the medium term is most likely to rely on 90% or more renewables and offset the remaining pollution with negative-emissions technologies.

So it looks likely gas will play an important but not expanded role over the next few decades. And if zero-emissions alternatives fall in cost faster than current projections suggest, the role for gas will shrink faster.

Three recommendations flow from these conclusions.

First, governments should have confidence in planning for a net-zero emissions future for the NEM by the 2040s. We’ve shown emissions can be reduced while maintaining reliable and affordable electricity supply.

Governments should not try to extend the life of existing coal-fired power stations, let alone subsidise new ones.

Second, net-zero emissions – not 100% renewables – is the appropriate target to be setting today.

Third, more transmissison infrastructure will help achieve higher renewable shares at lower cost. State governments should work together to resolve disputes about who should pay for interstate transmission upgrades.

And the states should not try to go it alone. Australia’s great energy transition will be most affordable if the states stick together.