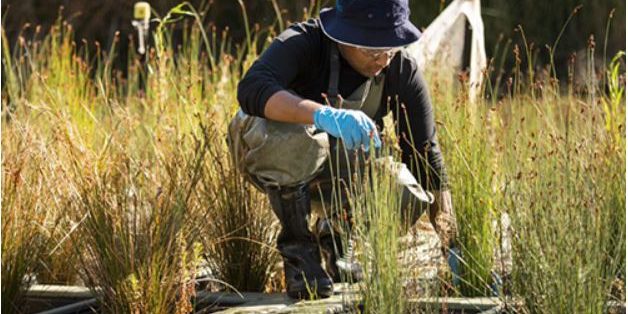 University researchers have demonstrated the ability of floating wetlands of common native reeds to remediate some of the world’s most indestructible and dangerous industrial chemicals known as PFASs.

The scientists at the University of South Australia studied the ability of native rushes – Phragmites australis, Baumea articulata, and Juncus kraussii – to remove PFAS’s (per- and poly-fluoroalkyl substances) from contaminated water.

The tests were carried out under controlled laboratory conditions at UniSA Mawson Lakes campus, with the scientists pointing out the next step was testing it in the real world, under natural conditions.

PFAS’s are the non-stick on Teflon cookware, the stain resistance in Scotchgard, and the suppression factor in firefighting foam, but long after initial use the substances continue to infiltrate the environment and affect human health.

According to the US Environmental Protection Agency, exposure to PFAS may lead to a range of health issues including a decline in fertility, developmental delays in children, increased risk of some cancers, a reduced immune system, higher cholesterol, and risk of obesity.

Conducted in partnership with CSIRO and the University of Western Australia, the research found that Phragmites australis, otherwise known as the common reed, removed legacy PFAS contaminants by 42-53 per cent from contaminated surface water.

UniSA and CSIRO researcher Dr John Awad said: “PFASs are often referred to as ‘forever chemicals’ because they don’t break down, instead accumulating in the environment and in our bodies where they can cause adverse health effects.

“Our research tested the effectiveness of Australian rushes to remove PFAS chemicals from stormwater, finding that Phragmites australis was the most effective at absorbing chemicals through its roots and shoots.”

The study used constructed floating wetlands as a mechanism for plants to grow hydroponically.

“Constructed floating wetlands can be readily installed into existing urban environments, such as holding reservoirs and retention basins, making them highly manoeuvrable and adaptable to local waterways.”