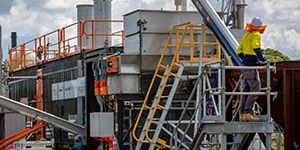 Logan City Council has claimed an Australian first, implementing a process to turn sewage into energy and biochar at Loganholme Wastewater Treatment Plant.

Australian Renewable Energy Agency funding of $6 million was announced in September 2019 for the $17 million project. Partners on the waste-to-energy development were Downer, WSP Australia, Cardno and Pyrocal.

The plant bakes biosolid sludge at “extreme temperatures” to release biogas, which is then used to heat remaining biosolids to make biochar, a soil improver.

According to the council, the treatment plant serves about 300,000 people and creates 34,000 tonnes of biosolids each year. It now sends “three truckloads” of treated waste to the Darling Downs every day, said Logan Mayor Darren Power in a statement.

The council is “exploring opportunities” to sell this soil treatment product.

“The gasification process perfected at Loganholme will reduce the volume of biosolids by 90 per cent and help our farmers,” added Power, who praised Pyrocal and Downer’s “innovative solution” and said it saved ratepayers $500,000 and cut 4800 tonnes of carbon dioxide emissions a year.