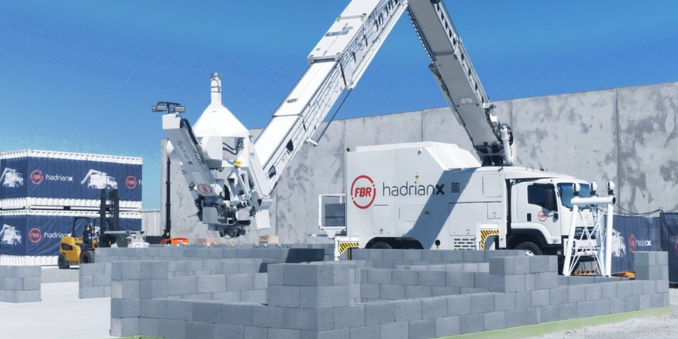 Construction robotics company FBR has announced that it has built its first two-storey house.

The ASX-listed business released a video this week detailing what it said was representative of “millions of this kind of house” around the world, and featured steel-reinforced concrete columns, a precast suspended concrete slab, and was for built using a new algorithm allowing a “retreat build” with the back side of the structure built higher than the front side.

“The completion of our first two storey build is a significant step in the commercialisation of our robotic construction technology,” said CEO Mike Pivac.

“In many parts of the world our customers want to be able to build two storey structures safely, quickly and efficiently, and we have now demonstrated that the Hadrian X® can deliver on those customer needs.

“We have also taken this opportunity to demonstrate our ability to work a range of design elements like steel reinforced concrete columns, which may be required in certain locations due to factors such as seismic activity, weather patterns or custom.”

He added that the additional features wouldn’t be found in two-storey townhouses seen in WA, but the demonstration was for an international audience that the robot could build to meet the relevant engineering requirements in their markets.

The house was built at FBR’s Perth headquarters, the company said.