There has been a series of successful IPOs for high-tech Australian manufacturing companies in recent months, including Carbon Revolution, K-Tig and Amaero Engineering.

3D printing bureau AML3D hopes to add to this, with a place on the ASX planned for March. Founder and managing director Andy Sales agrees that investors are keen on sophisticated manufacturers right now. The messaging from their stockbroker, Foster, is that “the market’s very much at the right time,” he tells @AuManufacturing.

“And just getting around Sydney and Singapore and Hong Kong, the mood is really on.”

Sales’s company can make large components out of weldable metals and alloys using a freeform additive manufacturing process. Their method uses wire as a feedstock and arc welding as a heat source. Weld beads are laid on top of each other by a robot arm, building up a near-net shape, which is then machined. In theory, the size of parts is limited only by the size of the robot and the workshop it operates in. A carbon steel panama chock, sent to Singapore last week for verification by a customer, measured 1.5 metres high and 1 metre long.

Another tier one shipbuilder is about to sign up for a 12- to 15-month scope of work, according to Sales, and AML has exported its first production cell to a Singaporean customer. He credits early successes – as one of very few companies that have commercialised wire arc AM (WAAM) – to a focus on standards and practicality.

The company’s facilities earned Lloyd’s Register certification in 2018 – the first WAAM company to do so – only ten months after starting up. The same year AML3D also invested the time and money in ISO 9001 quality management system certification.

“That’s been the key thing, because as an engineer – and as a quality engineer in oil and gas – we wouldn’t look at any supplier if they didn’t have some form of certification. Through our initial assessment process, if a company hadn’t got ISO 9001, but there’s three other companies that have, then you know who’s getting struck off the list,” explains Sales.

Besides extensive work on resources projects (and a year heading R&D at K-Tig) Sales’s background includes a Masters in welding engineering from the UK’s Cranfield University in 2012. Cranfield has led development of WAAM since the 1990s. Returning to Australia soon afterwards, he held commercialising the process “in the back of my mind.” 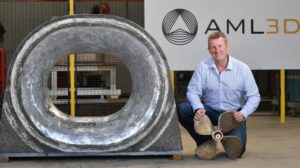 What’s been achieved so far is also, “I think mainly [because] we’ve not been attached to a university, even though this has come from an idea at a university,” he says.

“There tends to be cycles [of research] where they don’t retain knowledge except for the lecturers and maybe the scientists, who at the same time have also got other projects,” explains Sales, asked why WAAM hadn’t made huge strides outside of universities.

“Whereas… we put our money where our mouth is.”

He also offers that an emphasis on industrial applicability – with all the unsexy stuff like meeting standards – is an important point of difference against some other companies trying to take novel AM techniques to market. There’s an expanding constellation of 3D printing methods being offered, but many are still effectively in the R&D phase. Sales declines to name names, but says he does not enjoy seeing 3D printing as a category “dumbed down” by unverified claims and technology that isn’t quite ready for prime time.

Electric arc wire and powder techniques have been around long enough to be covered by American Welding Society and other standards.

“When it comes down to comparing [our] process against another, it’s like comparing an apple with an orange… Of course most people sort of look abstractedly at all of this and they just say, ‘well these guys, they did 3D printing and there’s another company doing 3D printing, and which one’s better?’” he explains.

“It’s not all about that. But I think there’s plenty of scope out there for all these processes.”

AML3D plans to issue prospectuses in February, and raise $9 million to support its expansion in Australia and Singapore.

It is offering the larger of its two machines for $680,000, as well as its bureau service.

Marine remains the most interesting market. There have been approaches from tier one aerospace customers, but it would realistically be years before a part flies on a plane, given the onerous certification requirements.