In the last day of our Robotics adoption matters series, Alexander Hadjiivanov discusses the case for AI in human-robot collaboration.

There seems to be a growing fear that artificial intelligence (AI) poses an existential threat to humanity – namely that AI might soon develop an agenda to take over the world, perceiving humans as competition for dominance in the process. This pessimistic view of the future conflates several issues, not the least of which is that ‘AI’ is often used as a blanket term to refer to both physical robots and the software implementations of various machine learning algorithms. The phrase ‘intelligent robots’ invokes a mixed feeling of awe, fear and a vague sense of guilt – surely we don’t really want machines that work for us around the clock to be intelligent. Or do we?

It is not surprising that most future scenarios that portray AI and humanity as competing forces end badly for either or both sides. The key term in this context is ‘competition’, which begs the question: what scenarios can we extrapolate if we start with the assumption of collaboration, where joining forces results in a product that is greater than the sum of its parts?

Let’s look at a representative field that is becoming highly automated: manufacturing. It is no surprise that businesses across the board are adopting robots in advanced manufacturing – robots are (and have been for a long time) more efficient and precise than humans, and they can work around the clock.

However, the lack of intelligence in industrial robots comes with an inherent drawback. An automated factory might produce millions of items, but there is not much variety in what kinds of products it might produce. Try as it may, an industrial robot in a car factory cannot produce a fridge – it is not designed for that. While it might have the necessary power to bend metal sheets and a couple of manipulators with eight degrees of freedom, it cannot deviate from its program. Sure, if reprogrammed appropriately, it might eventually be able to produce a working fridge, but the economic cost of that exercise is so enormous that businesses naturally do the most logical thing: they build another factory, this time for fridges, with other robots designed for that task.

This brings us to the concept of ‘economy of scale’, which basically refers to the fact that the cost of operation is inversely proportional to the number of items produced. Building a factory that produces only ten items over its lifetime (or a hundred, or even a thousand) does not make economic sense. Factories (and therefore industrial robots) only make sense if millions of items are being produced – otherwise the investment cost becomes prohibitive.

With that, we arrive at the third point: design. A product begins its lifetime as a concept – an initial design is created, then refined over many iterations until a prototype can be built. If the prototype works, its wrinkles are ironed out, and finally it is ready for mainstream production. By that point, there has been a significant investment, with many people involved in the process of designing, prototyping and testing. This cost (and the cost of building a factory) can be offset if millions of items are produced. The design had better be sound because once manufacturing begins, there is no going back – we are churning products to that exact specification.

However, we see examples of flawed design everywhere. New cars pass safety checks with flying colours, only to be recalled a year later because of a faulty airbag, accelerator or fuel tank inlet. Computer chip makers have to release firmware patches to compensate for flaws in the design of their chips. Household goods such as washing machines and dishwashers fail because of poorly designed ball bearing or drive shaft. These problems become more and more pronounced as the complexity of the product grows. 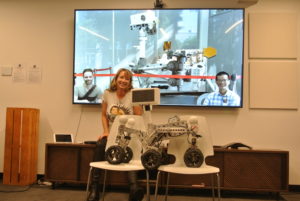 Let’s take a step back and think about what it would be like for manufacturers to have access to intelligent robots – cobots – that can work alongside humans on the task of creating new products. The robot may be well equipped to manufacture anything from a fridge to a car, but now it is not following a predefined program; instead, it works with humans to distil a set of high-level specifications that it can understand and execute. Instead of taking months to go from design to prototyping, now the process takes hours or days, with multiple prototypes built in quick succession because the humans do not have to make anything by hand, and they don’t have to spend months programming the product specifications into the robots. This not only saves time, but also gives a chance for a product to be tested under different scenarios, with slightly different characteristics in each iteration – a true evolutionary process. The reduced time means reduced design cost, meaning that all of a sudden low-volume (and even single-item) manufacturing becomes cost-effective. Manufacturers can now make diverse products requested by different clients, without compromising quality or having to make a substantial investment in advance.

However, the best feature of such intelligent robots would be their ability to learn and generalise. Do you have an idea for a washing machine with a manipulator that can take the clothes out and hang them up for you? If a human/robot team has designed washing machines and robotic arms before, it would only be an incremental step to combine them – and what is more, making only one unit of the final product is not prohibitively expensive. This may even lead to the widespread adoption of ‘metamanufacturing’, where manufacturers would offer intelligent robots as a product – so that anyone can have a go at creating that wacky product that would only be useful to them, with the aid of their own intelligent robotic assistant.

It is easy to see how this paradigm can be extended to many fields where humans and robots can work together – from resource exploration to surgery. There are also numerous other benefits of humans collaborating with intelligent robots, such as safety (for example, when humans are working in hazardous conditions). For this to work, we need to be open-minded – after all, if we are trying to expand the minds of robots, the least we should do is the same with our own.

Dr Alexander Hadjiivanov is Head of Research at a·kin AI.