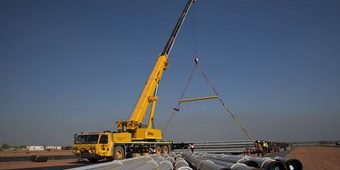 The federal opposition has pledged, if successful at the May 18 election, that it will use $1.5 billion re-purposed from the current $5 billion Northern Australia Infrastructure Facility to address the east coast’s gas shortage.

The Sydney Morning Herald reports that opposition leader Bill Shorten made the announcement while campaigning in Queensland yesterday. The NAIF – which began operating in 2016 and has supported only one small logistics project in WA so far – would be scrapped. Shorten said that the $1.5 billion would support pipelines from the Queensland Galilee and Bowen basins, and one from the Beetaloo Basin in the Northern Territory to Darwin. The latter could assist Darwin in becoming a “manufacturing powerhouse,” said Shorten.
The Energy Users Association of Australia, which counts manufacturers Brickworks and Incitec Pivot among its members, welcomed the announcement.
“Bringing on new supplies of gas along with supporting new participants will help increase competition and lower costs which are some of the steps we need to take to resolve the current east coast gas crisis,” said its CEO Andrew Richards.
The EUAA last week released a National Gas Strategy Discussion Paper, calling on whoever forms the next government to “solve the gas crisis threatening Australian manufacturing, food processing, building products and chemical industries.”
Antoon Boey, the manager of corporate development at gas distributor Jemena, told The Australian Financial Review that based on discussions with developers, gas from the Galilee could be online in two to three years from Galilee Basin, and from Beetaloo two to three years after that.
Picture: jemena.com.au
By EditorApril 24, 2019
Share this post
Share on FacebookShare on Facebook TweetShare on Twitter Share on LinkedInShare on LinkedIn Pin itShare on Pinterest Share on WhatsAppShare on WhatsApp