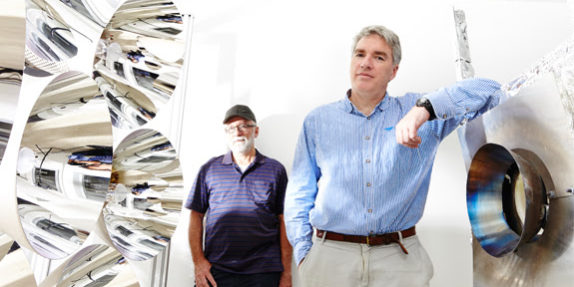 Researchers from Melbourne’s Swinburne University have looked to the heavens and decided there is gold (and other metals) orbiting the earth and on the surface of the moon that could be recycled with the right technology.

According to the university there are more than 100 million pieces or around 8,000 tons of space debris orbiting around us, mostly consisting of satellite and rocket scraps.

Another 200,000kg of man-made materials rest on the lunar surface and this amount will increase with the future missions.

According to the German Start-up, Orbit Recycling, more than 150 tons of aluminium alone can be regained and recycled on the moon, saving billions.

Orbit Recycling calculated the total cost of recycled aluminium on the moon to be 150,000 euro/kg, which is a fraction of the transported material cost from the earth.

A Swinburne research group led by Professor Geoffrey Brooks, Associate Professor Boris Eisenbart and Professor Alan Duffy is focused on the recycling metals on the lunar surface, working with researchers from India, China and USA.

“Lunar recycling represents a significant challenge but is a critical issue to address.

“All major space organisations around the world are planning lunar missions.

“Now is the time to think responsibly what we leave behind in our future lunar missions, especially if we want to develop sustainable human presence on the moon.”