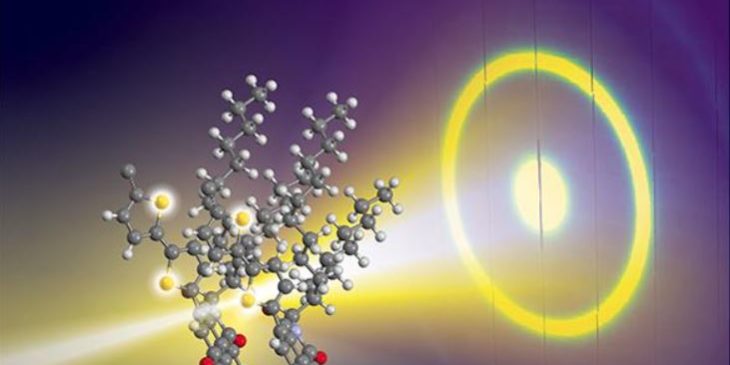 The Australian Nuclear Science and Technology Organisation’s advanced X-ray techniques have revealed new structural details about the arrangement of atoms in conjugated polymers, an important class of materials that are used in LEDs, organic solar cells, transistors, sensors and thermoelectric power devices.

The research, conducted at ANSTO’s Australian Synchrotron in Melbourne, offers the possibility of making these solar and other technologies more efficient.

Conjugated polymers are organic macromolecules with an unusual electronic structure, a backbone with alternating single and double bonds, which produces useful optical and electrical properties.

The research, published in the Journal of the American Chemical Society (pictured), involves scientists from Monash University led by Professor Christopher McNeill, in association with American collaborators at Brookhaven National Laboratory.

They demonstrated that resonant X-ray diffraction performed at X-ray energies that resonate with sulphur atoms in the polymer can discriminate between different types of packing structures in conjugated polymers.

The resonant diffraction measurements were undertaken at NSLS-II at Brookhaven National Lab in the United States by Guillaume Freychet.

Thomsen said conjugated polymers have a ring structure, like benzene, with orbitals coming out above and below the rings.

“The electrons move through the orbitals.

“If you have a device that has a couple of electrodes on either side and a conjugated polymer layer in between, you want all the polymers orientated in the same direction, so the electrons can move through freely from one electrode to the other.”

A new Medium energy X-ray absorption spectroscopy beamline under construction at the Australian Synchrotron as part of Project bright, will be ideally suited for these experiments in the future.