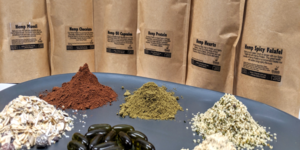 Tasmanian company 13 Seeds looks set to be another listed Australian hemp business, and is aiming for an IPO of up to $6 million, to be completed by next month.

The IPO is based on an $8 million pre-money valuation, according to a statement by 13 Seeds, “with funds to be used to execute a growth strategy including expanding domestic distribution, growing online sales and new product development.

“The offer closes mid to late November, with 13 Seeds aiming to list on the Australian Securities Exchange by December 2019, and commence trading under the proposed code ASX:13S.”

The company was established by Terry Memory and Gemma Lynch-Memory in 2016, and makes a range of oils, drinking chocolates and other foodstuffs, and neutraceuticals. It was founded in 2016, after the couple developed hemp-based oils and skincare formulations to treat one of their children’s psoriasis.

Hemp seeds were approved as a food product in Australia on November 12, 2017, and 13 Seeds launched its first products the day after.

ASX hemp and cannabis listings since 2018 include Elixinol Global, Althea, and CANN Global.