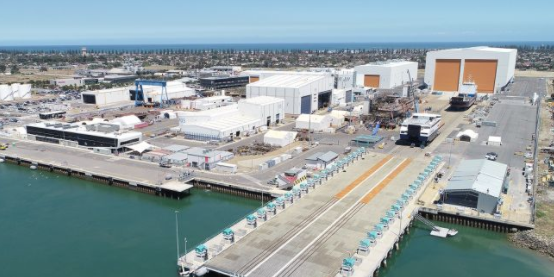 @AuManufacturing‘s editorial series, ‘Working smarter with data‘, concludes today with a profile of the most ambitious digitisation programme underway in Australia – the creation of a unique, fully digital shipyard in Adelaide to construct naval vessels. By Peter Roberts.

A broad stretch of Adelaide’s Port River sweeps past what is Australia’s most advanced programme of manufacturing digitisation – the creation of the world’s first fully digital shipyard.

Built by government-owned Australian Naval Infrastructure, the Osborne shipyard will be leased by defence contractor BAE Systems Australia subsidiary ASC Shipbuilding for the duration of the biggest surface warship construction programme ever undertaken in the country.

Nine of the world’s most advanced anti-submarine warships, known as the Hunter class frigates, will be built in the yard using typical modular shipbuilding construction methods and familiar technologies such as cutting, grinding and welding.

But, according to ASC Shipbuilding’s continuous naval shipbuilding strategy director, Sharon Wilson (pictured below), that is where the similarity with BAE System’s other frigate building site at Govan on the River Clyde, starts and finishes.

Wilson said: “We have a brand new shipyard and it is being built as a digital shipyard from the start.

“It will be more advanced than Govan and will be held together by a digital thread that goes from digital design right through to production.

“It is a big task and a great problem to have.” 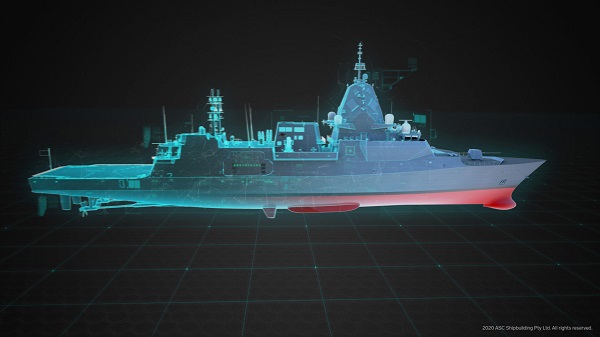 Wilson cut her teeth on other advanced manufacturing projects, including BAE Systems’ machining centre also in Adelaide where the company constructs titanium and carbon fibre vertical tail fins fitted to Australia’s ultra-sophisticated F-35 Lightning fighter jets, as well as those of allied nations.

Now she is hunkered down at Adelaide’s Tonsley Innovation Precinct where a training factory and an R&D ‘sandpit’ has been created in a $10 million programme enabling lab-developed solutions to be trialled in a semi-industrial environment.

Wilson said the future shipyard’s digital thread would begun with a digital design, a 3D model of the future frigates where every part and system can be examined in a visualisation suite, subjected to finite element analysis, pushed to the limit and fine tuned.

BAE Systems and suppliers and customers can look at how parts fit together, the build sequence for every module and the final vessel, how systems will perform, be maintained and updated – all in a virtual ship that is put through its through-life paces.

“You can design in safety.

“You can design in things like bunks and people – will they fit – how you get stores in and out, equipment in and out and how missions are performed.”

The next stage is digital planning of how you execute the work, with digital drawings and ERP data built up from the big picture right down to digital work orders detailing work to be performed by each worker, each day of the ship build.

With 2,600 direct workers labouring in the Osborne yard at its peak and 5,000 in total including suppliers, it is a massive digital task.

Wilson said: “It will all be digitised, so there will be no paper.

“The key thing is to be able to collect data that talks about the performance of the yard – it is all about efficiencies and effectiveness.

“It is not just building the best, but being able to prove you are doing so.”

Shipbuilding has traditional measures of efficiency such as dollar cost per tonne, but the Osborne yard will break new ground even here with an unprecedented understanding not only of what was intended to be built – but what was actually built.

That is why each vessel’s digital thread will follow it into active service and throughout its active life, the 3D model of the ship predicting when maintenance is needed, changing over time as parts are changed in and out and new systems fitted.

In this way the Royal Australian Navy, and potentially others who will own the vessel afterwards, will know exactly what is in the ship rather than what is drawn on a dusty blueprint.

But right now the task is to develop and fine tune the design and develop the digital manufacturing systems that will being this paperless shipyard to life.

SMEs will have access to Line Zero’s capabilities and companies such as additive manufacturing technology group AML3D are already working with ASC Shipbuilding to validate their 3D printing technologies for the build.

Time is moving on and the company is working against a deadline – in September it was given the green light to begin prototyping activities next month.

Wilson began her career as a project manager and to her, one of the most exciting thing about the frigate construction and shipyard is what it would leave behind at the end of the decades long construction period.

Technology transfer is in full swing with ASC Shipbuilding staff at work at Goven and BAE Systems UK staff in place in Australia.

She said: “This is not just about building ships, it is about building a sovereign capability that by the end of the programme will be able to design and build its own ships in Australia.

“This is the first build that has had a structure and a plan to deliver that right from the start.”