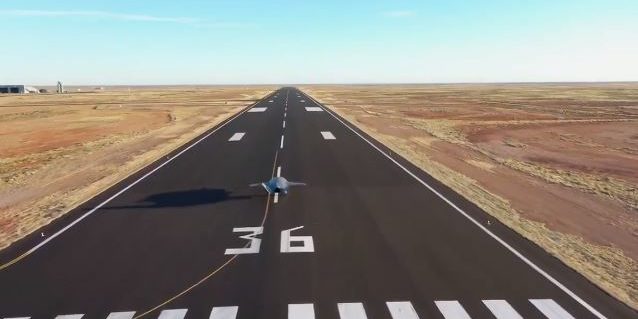 The Department of Defence has released video footage of the Boeing Loyal Wingman unmanned aircraft’s first flight, at the same time as it was confirmed the government would spend $115 million on a further three aircraft.

The prototype – one of three engineered and built in Australia – flew under the supervision of a Boeing test pilot in a ground station at Woomera Range Complex in South Australia.

Boeing confirmed that the government had ordered a further three aircraft to advance the aircraft, payloads and associated support and training capabilities.

“Continued digital engineering and significantly expanded live testing of the system will provide RAAF and Boeing with the ability to jointly take the concept to the next level, activities that are critical for us to rapidly understand how the Airpower Teaming System can be employed in the future battlespace.”

The Loyal Wingman is an 11.7-metre aircraft being developed by Boeing Defence Australia and the Royal Australian Air Force, with a team of over 35 Australian participants, including BAE Systems, Ferra Engineering and RUAG Australia.

It is the first military aircraft to be developed and built locally in more than 50 years, and will fly in company with unmanned and manned aircraft, such as the F-35 Joint Strike Fighter.

According to the Department: “The Loyal Wingman program allows the Royal Australian Air Force to explore capability enhancement and concept development to make informed decisions about future acquisitions, and adaptations to existing operating concepts.”