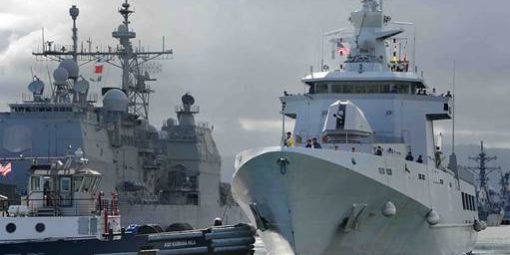 The company, a subsidiary of Electro Optic Systems, has completed development of its new system by achieving Wideband Global SATCOM (WGS) certification, allowing it to be used with terminals accessing the military WGS.

The ADS is able to automatically sense and switch traffic between dual antennas when one of them is blocked from satellite view.

The terminal can also split traffic between the dual antennas – even to different satellites – when both have satellite visibility.

The system has previously been certified for operation on the commercial Inmarsat GX network.

EM’s naval terminals are gimbal mounted, and so can track satellites in space even in heavy sea conditions.

EM Solutions CEO Dr Rowan Gilmore said “The ADS is an important innovation that has been several years in development for our navy customers in Australia, Europe, and the Middle East.

“If one satellite terminal is blocked from seeing the satellite by the ship’s mast or another structure the system automatically directs traffic to a second terminal on the other side of the ship.

“It also increases the resilience of the link since two terminals and their channels are normally available.”

EM Solutions has an eighteen-month order book of satellite terminals to supply several of the world’s navies, including the Royal Australian Navy (pictured).

EM Solutions is doubling its factory capacity to accommodate production of the dual systems that the ADS will require.

EM Solutions’ Cobra terminals are the only maritime terminals available globally that can access both the WGS and other commercial constellations such as Inmarsat GX.

Dr Gilmore said “The ADS is unique technology since it switches the physical path of a channel from multiple modems to the appropriate satellite antenna.

“Avoiding the use of a router makes switching automatic and prevents any complexities associated with encryption.”