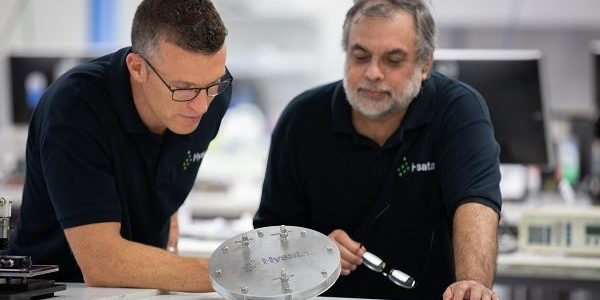 University of Wollongong-headquartered Hysata recently made headlines with a breakthrough paper in Nature Communications, demonstrating a “giant leap” in water splitting progress and a claim to be on track to $2/kilogram hydrogen by 2025.

The UoW spinout business was launched in mid-2021 with $5 million in seed funding from the IP Group and the Clean Energy Finance Corporation. According to its leadership team it is in 30 or so active customer conversations at this moment.

Hysata plans to establish a pilot plant this year, where it will make its modular, 250 mm diameter electrolysis plates, and is working towards production, planned for 2025.

@AuManufacturing: Could you give an idea about how your approach was formulated, roughly speaking, and about deciding to start with a clean sheet of paper rather than looking at a current electrolyser design and perhaps deciding to tweak a thing here or there?

Gerry Swiegers: Sure. If you look at the history of water electrolysis, it’s been around for 200 years and the industrial history of it has been that people have developed new types of cells that have less electrical resistance. The key was to find ways to reduce the electrical resistance in the cell, and it turns out that electrolysis cells actually have many, many different sources for that. And so we started with a clean sheet with two new PhD students at the time. The challenge we set them and ourselves was to come up with a way to remove or reduce as many of those electrical resistances within the cell as possible. And we tried to conceive of cell designs for that, and that’s where the concept came from. And once we had developed the concept, then we challenged the new students to 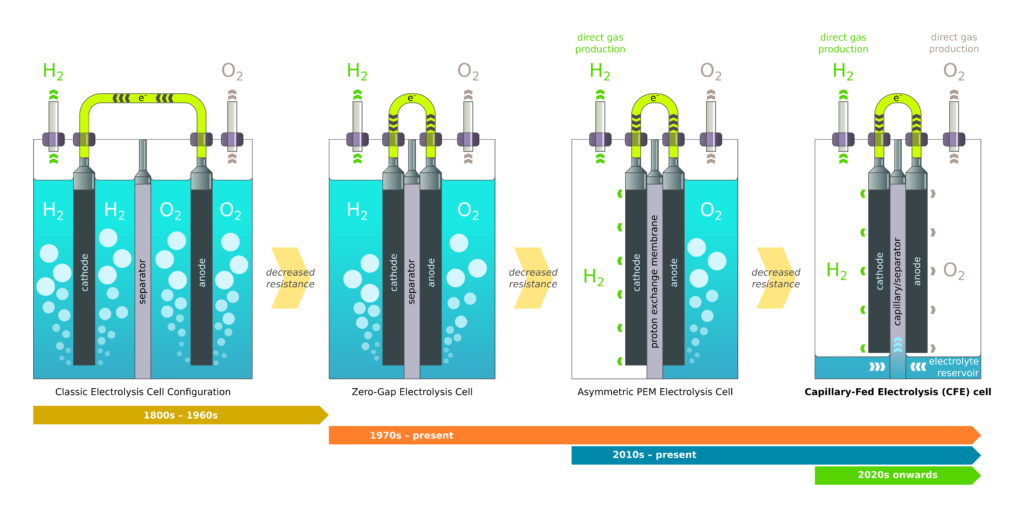 go and study it and see whether it was possible. I have to say the two students were excellent. Aaron Hodges and Anh Linh Hoang did an excellent job in teasing out all of the information. And that’s the reason for the high performance that we have now.

Paul Barrett: I think it’s also worth pointing out that Gerry’s pretty humble, and a Nature paper is a big deal. These are rare occasions to have a publication in a journal of that kind of pedigree. Gerry and his team not only did this invention and proof of concept, but Gerry went straight into mass manufacture mode. He said, ‘OK, we’ve got a good concept here, but good concepts don’t get you into manufacturing quickly.’ You’ve really got to have a manufacturing mindset, and it was integrated into Gerry’s research lab and is now oozing so the company. Everything has got to be designed for flexibility.

@AuManufacturing: I’m guessing that you have had other commercial ventures come out of your research community and you understand that while fundamental research is important, it would help to think simultaneously about turning that into a product.

Gerry Swiegers: That’s exactly how we were thinking.

@AuManufacturing: We read an old article about AquaHydrex, another UoW water-splitting spinout that you helped found and were CTO of, and photosynthesis was mentioned as being an inspiration behind their technology. Was bio-inspiration involved here?

Gerry Swiegers: To some extent, but we’ve moved on a bit from that early conceptualisation. We came to realise that at the end of the day, you need to produce lots of hydrogen as efficiently as possible, so that that original concept sort of evolved into that. And obviously then we’ve also been lucky in that our system has actually made the balance of plant engineering system around the electrolyser much simpler, which then also feeds into simplifying everything. It’s more amenable to mass production. So we’re truly in industrial mode now, where before we were trying to learn from biology.

@AuManufacturing: We wanted to know a couple of things about what you’re making these cells out of. We saw that the separator is made of polyether sulfone, not a hugely exotic material and one that has been around for a while. Tell us about some of the other components, please. Are there exotic catalysts or anode or cathode materials that are hard to come by and expensive? Have you tried to keep it simple?

Paul Barrett: I think the soundbite here is we’re not going to give away the full bill of materials, but everything is off the shelf. We didn’t want to have a product concept where we needed to invent a new material and manufacture a new material. So we can manage our supply chain pretty well to get access to all the materials we need. And to complement Gerry’s team of outstanding scientists, we’ve built a powerhouse of engineering. And we’ve have 20 people on the team at the moment, and a big focus on design for manufacturability. The core manufacturing step is going to be injection moulding, so we can mass produce these individual cells and then essentially stack those cells together.

@AuManufacturing: Tell us about your plans to open a pilot plant this year and then scale up? Paul Barrett: We’ve got pretty ambitious plans and we have to. This is a net zero story and essentially the planet needs high efficiency, low cost electrolysers to enable the decarbonisation of a lot of hard to abate sectors.

And we’re lucky enough to have high-conviction investors as well that are bringing a lot of techno-commercial value to the table. We have IP Group and the Clean Energy Finance Corporation who have just launched Virescent Ventures. So that gives us a powerful platform to turbocharge development and run a lot of work streams in parallel that an ordinary start-up might run in sequence. We’re already working at the scale of individual or several cells together. And for scaling up, I’m an engineer, and scale up is never easy, but in our case, it’s just about stringing these cells together. So that’s the path we’re on. We’re going to have a pilot line next year. And aim to have a manufacturing line and our first product with customers in 2025.

@AuManufacturing: Do you imagine it will be in Wollongong?

Paul Barrett: So we’re an Australian rooted company, and so we’re so deeply committed to Australia. And as you can imagine, there’s lots of state governments keen to get our business and I think it’s likely the pilot line will be in Wollongong and the manufacturing line is probably up for grabs.

Gerry Swiegers: But somewhere in Australia. 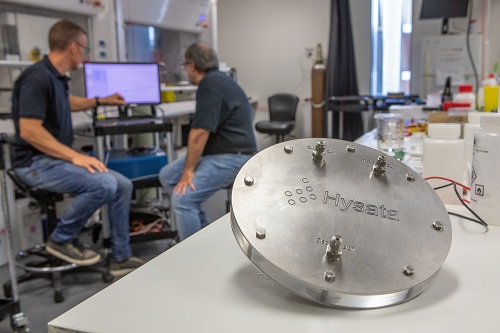 @AuManufacturing: Lastly, earlier you mentioned being committed to Australia. With Gerry’s background at AquaHydrex, which seems like an American company now, are you determined to avoid what happened there?

Paul Barrett: First, we don’t want to talk about AquaHydrex in this interview, if that’s OK. But let me focus here on Hysata. Hysata is a proudly Australian-founded company with Australian investors. We’re deeply passionate as a leadership team to keep this company in Australia and we’re surrounding ourselves with the right team and the right investors to make that happen. And we’re 100 per cent convinced that we’re going to be able to manufacture this in Australia. And actually, just the other day, we were at a pretty big injection moulding facility in the Sydney area, checking out their manufacturing capabilities, because as I mentioned earlier, that’s going to be a key part of our manufacturing process.

And Gerry and I are long enough in the tooth now that we’re not going anywhere.

Maybe what I’d re-emphasise, and you’ve probably picked this up from the Guardian and the AFR articles and the press release, is that this efficiency advantage we’re bringing to the table is not an incremental improvement. We’re going from 75 per cent system efficiency to 95 per cent. And when we speak to customers this absolutely moves the needle for the price of green hydrogen and really puts us on par to be at more cost competitive than fossil fuel-derived hydrogen.

I don’t know if this is newsworthy, but it’s one of the key ingredients to making this happen. We’ve got that core intellectual property, we’ve got the capital support, and we’ve got a really wonderful team of 20 people. And that 20-people team is going to grow substantially over the next 12 to 24 months, and we need Australia’s top minds, top talent, top engineers. And so we’ve really got a call to arms to get the best people involved.

@AuManufacturing: I think it’s newsworthy if you can say how many people you plan to hire.

If we’re having an interview this time next year and we’re kicking our goals, we’ll probably have close to 50, then 100 in 18 to 24 months.

This interview has been lightly edited for clarity.