Improving the way we view plastics 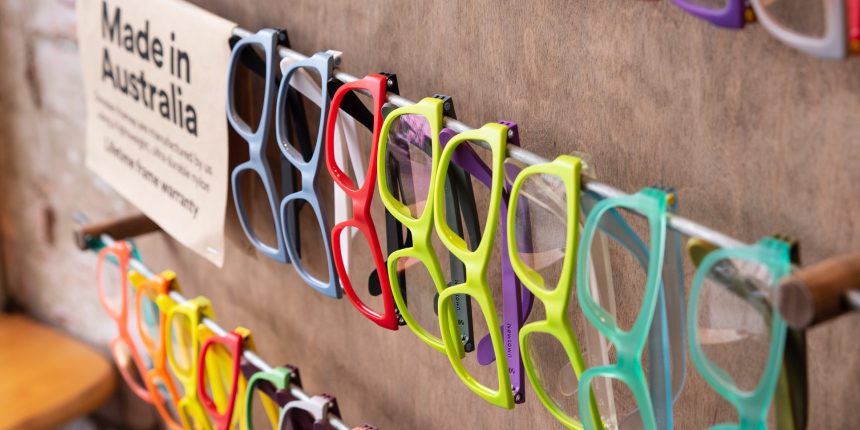 Manufacturer/retailer Dresden is preparing to open its 14th outlet. Another approaching milestone – one tonne of plastic recycled – is further validation of its unconventional approach to eyewear. Brent Balinski speaks to Elmar Kert, the company’s Head of Global Operations.

Dresden opened its first store in Newtown in 2015. The year before, founders Bruce Jeffreys and Jason McDermott decided that the traditional eyewear market – well and truly dominated by EssilorLuxottica – was garbage. Long waits for glasses and expensive but flimsy products were there to be improved on.

“Polypropylene is the same, but then there might be different strains,” explains Elmar Kert, Dresden’s Head of Global Operations, of the variability involved when experimenting.

“And there’s, for example, nylon 6, nylon 12, there’s nylon 66 – they all have different structural, and internal and chemical abilities, so you can’t just use them in any sort of application.

“What we need for our frame, especially, is something that’s flexible, and won’t break because it’s obviously something that sits on our customers’ faces.”

The first step is to analyse and understand the complexity of a new (old) material. They have worked with chemists and engineers at University of NSW’s Sustainable Materials Research and Technology (SMaRT) centre. SMaRT has also helped in figuring out what additives can be used to improve material properties.

The second step is around availability. Using a third party to pelletise plastics for injection moulding means MoQs, which can present difficulties.

Initial efforts weren’t pelletised. “We just crushed things up in granulators and then took them straight into the machine and we were like ‘hey this actually works,’” recalls Kert.

“This basically gave us the indication to say, ‘Okay, we need to figure out a way how to collect enough plastic to hit those minimum order quantities, and then get things pelletised to use everything in an efficient and also economic manner.” 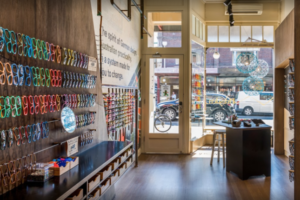 Scaling up is something Dresden is in the middle of. It is about to open its third New Zealand store, and trying to improve efficiencies across its network, says Kert.

Frames are made in Lakemba, sent to outlets around Australia, NZ and Canada, and lenses are cut in-store.

The frames are also modular, and parts are designed to be easily switched out. The company doesn’t purge between batches of plastics, too, leading to interesting, random colour combinations. It’s designed to be fast, fun and affordable: the opposites of what they’re competing against.

Prices for frames begin at $49. There are four sizes, many colours, but only one style, with its founders comparing this to Swatch’s approach to watches.

Current projects include a three-year CRC-P project around its “Intelligent Mixed Waste Re-manufacturing System” and a collaboration with resource recovery business Sustainable Salons.

The circular economy movement is something dear to Kert, who was involved in a couple of startups in Vienna – including a platform to match people with and reuse building materials – before moving to Sydney.

He believes that story-telling is hugely important to improving the reuse of plastic and other materials. It’s can also be fun and engaging.

“I think a huge part is just educating people, because they see a huge value in those stories as well, so it won’t just be better for the environment and for the internal sustainability economy in Australia, but also for businesses at the end of the day, because people really do enjoy buying things that are sustainably made,” he says.

“If there’s a backstory to it, then people are drawn to it.”

As for the eventual Australian waste export ban, this is something his company is excited about, but a lot of work is needed for it to be handled properly.

The recent $20 million CRC-P announcement for plastic is “a drop on a hot stone” as far as recycling businesses are concerned.

“The industry right now is fighting on a lot of different fronts, for example insurance. Insurance for recycling plants is currently so expensive that a lot of them are shutting down and being forced out of business,” Kert observes.

Plastic – both physically and image-wise – needs to be recycled, he believes. While efforts like roads made with Close the Loop/Downer’s TonerPlas are good, and much better than landfill, “we can do better,” suggests Kert.

“The capability of being able to re-use it in a variety of different applications should be pushed and expanded rather than just burying it in our roads,” he says.

“For example we use recycled resources coming from waste to create low-cost and high-quality eyewear to give people with vision impairment sight.”