Leadership in factory automation — Wood from waste for a world market Leadership in factory automation today looks at 3RT, a company that turns wood waste into a product that looks and performs like 100-year-old hardwood. Founder and managing director Peter Torreele says that advanced automation is essential to goals of an affordable product that performs like naturally-grown timber, and can be made and sold locally anywhere in the world. By Brent Balinski.

Years ago, while running an Australian-Chinese company that introduced strand-woven bamboo flooring to the world, Peter Torreele kept getting asked the same question from customers.

Fast-growing bamboo grass could make a sustainable, high-performing alternative to tropical hardwood, sure, but why didn’t they just use waste wood?

“I said, ‘What waste wood?’ That’s when we started doing a bit of research into the supply and the value streams of hardwood in traditional sawmills… We were blown away by the amount of waste being created,” recalls Torreele.

After an introduction to Flinders University researchers and some investigations the concept was deemed possible. Encouragingly, nothing of the kind had been patented. Torreele co-founded 3RT with the university’s Professor David Lewis and Associate Professor Jonathan Campbell in 2014.

The company currently sells a product called Designer Hardwood to Australian customers, processed out of forest and plantation residue, and which “looks, feels and has the mechanical properties of 100 year old native timber”.

Their process uses heat, pressure and a specialised “Nano-glue” which was inspired by lignin, a naturally occurring polymer in plants. 3RT won’t say much about it, other than it’s water-based, non-toxic and reacts with wood fibres to provide strength.

You could create tailored substitutes that perform like countless kinds of wood from all kinds of waste wood inputs — if the recipe is right, says Torreele — but they are currently consolidating veneers to make DH, because this gives a look indistinguishable from regular hardwoods.

“What we have today is what the market wants us to produce… because there is a big supply shortage,” Torreele tells @AuManufacturing.

“If tomorrow one of our customers said, ‘Oh, I really would like you to work on this product here, and use this material,’ then we will do that.” 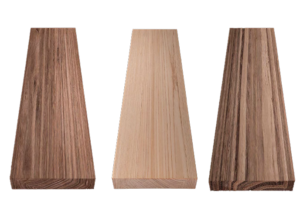 Torreele’s answers to questions about why the company does what it does are often expansive, but asked about whether 2022 will be the year it goes international, he gives a one-word answer: yes.

As with many high-technology manufacturing businesses nowadays, 3RT is difficult to categorise. It is in some ways a recycling company, as well as a venture accumulating gigantic amounts of data for biomimicry, an R&D firm for its customers, and a special purpose machinery provider.

An ABC article from the year of 3RT’s founding mentions the cost of a processing machine of $3 million to $5 million.

Today costs are highly customised, taking into account the potential customer’s whole value chain and based on what additional services they will need.

Some will own plantations, a ready source of timber, complementary machines (for example a plywood line already making veneers), and have their own customers for Designer Hardwood, with their own demands. A small company might need more technical, developmental and other support than a large one.

“We have a tool which is a return on investment simulator. And we work together on a licence or royalty fee — whichever makes sense for both companies,” shares Torreele.

“The concept of us coming out with a fixed price just goes against the whole concept that we have, which is actually responding to market needs in a competitive way.”

Product development has been slow and careful, and Torreele is emphatic about the importance of it being driven by what users want. He cites three years with a minimum viable product for their hardwood, sent out for free to a select group of furniture makers, wood turners and TAFEs around Australia, to collect feedback on how it works and can be improved.

“The biggest danger is when we think that the technology is a godsend and the market will welcome it with open arms; it never happens,” he explains.

“The things we have learned through the minimum viable product and the changes we constantly make — still today — to make sure it solves the real problems of our customers is the biggest job. It’s the hardest job. The R&D is the easy part, really.”

Research collaborations are with Flinders University’s Institute for NanoScale Science and Technology, as well as with chemical company Henkel on Nano-glue, and Bosch Manufacturing Solutions, which builds 3RT’s production units.

What we try to do is the opposite

Everything developed is driven by three guiding principles: what’s made must look and feel like natural hardwood, it must be natural and non-toxic, and it must be affordable.

Which brings us to the relevance of this story to @AuManufacturing’s current automation series. 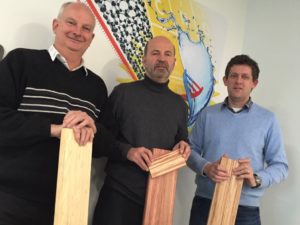 “Our whole idea of sustainability as well was source local, produce local, sell local, so the concept had to work in every country in the world, including Australia or Europe, which have high labour rates,” adds Torreele.

“So this concept was driving us therefore to very advanced automation. This whole line, which has the output of a traditional sawmill, is run by three people.”

Next year it plans to export its machines in partnership with Bosch, with the units feeding processing data back to 3RT’s Adelaide innovation centre to help finetune the process and make it more robust.

The two-robot cells are equipped with over 100 sensors, according to the founder, picking up information about inputs, outputs and everything in-between.

“The process is biomimicking nature, and nature is very complex. Although the machine looks simple, it is actually a very complex process to get it right,” he adds.

“To make sure that every time you run the line with one particular species or one particular input, you have the same output in terms of properties. And that’s basically the basis of what we do with the algorithms and the analytics.”

The company has been capturing data since 2014 and its first R&D line (they’re now up to generation four.)

Getting a few units up and running around the world will gather further insights on how to further cut the wastage wedded to old ways of working. Through sawmilling, only about 30 per cent of harvested hardwood ends up as quality timber. The rest is discarded or used for low-value applications, such as energy from biomass.

“A big part of the waste in the wood value chain is cutting out the pieces which do not fit a certain machine: It could be if we have a knot or a hole, you cannot use it. If it is too thick, it cannot go through this machine,” adds Torreele.

“So what we try to do is the opposite. We’re trying to make sure that the machine can handle the variations of the input material.”