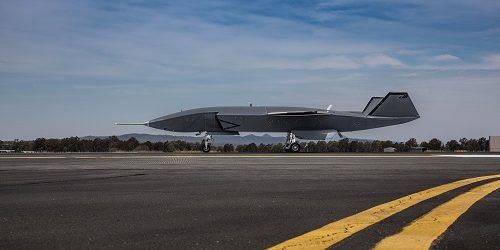 The Boeing Loyal Wingman has moved under its own power for the first time, ahead of planned flight by the year’s end.

The prototype aircraft achieved a maximum speed of 14 knots (26 kilometres per hour) and demonstrated several activities while maneuvering and stopping on command, according to a statement from Boeing. Boeing is developing the aircraft with the Royal Australian Air Force.

“The low-speed taxi enabled us to verify the function and integration of the aircraft systems, including steering, braking and engine controls, with the aircraft in motion,” said Paul Ryder, Boeing Australia Flight Test manager.

The Loyal Wingman is an 11.7-metre unmanned aircraft being developed by Boeing Defence Australia and the Royal Australian Air Force, with a team of over 35 Australian participants, including BAE, Ferra Engineering and RUAG Australia.

It is designed to fly in formation alongside more expensive and complex jets such as the F-35 joint strike fighter, providing dispersed sensor and operational capabilities.