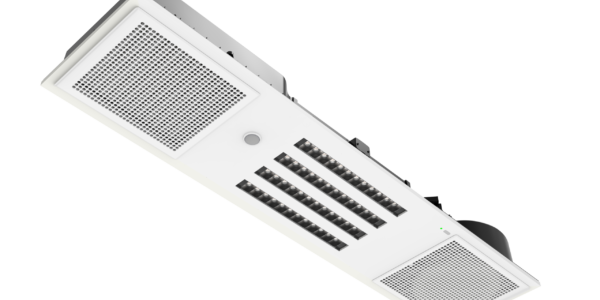 Pierlite has launched what it says is the country’s first air-purifying LED light fitting, able inactivate and remove 99.995 per cent of harmful pathogens and deliver 170 cubic metres per hour of clean air.

The Australian-engineered luminaire, titled the Aether LED Troffer, is described as using a motor in its inlet grill to continuously draw in air, followed by treatment with ultraviolet (UV-C) radiation to damage the DNA of pathogens and render them ineffective, passage through a medical-grade HEPA H13 filter, then expulsion of clean air via an outlet on the opposite side of the fitting.

The new light is designed for easy installation in modular ceiling grids, is powered by a 20-watt DC motor, and can be fitted with IoT sensors and control, according to the company: “providing users with features including real-time air quality, energy usage and occupancy analytics”.

“The Omicron wave we saw in January showed that despite high vaccination rates, the risk of virus transmission indoors remains at an all-time high. At this critical time, we are proud to bring one of Australia’s safest, most efficacious solutions to market to help Australian organisations reduce virus transmission, keep occupants safe and reduce critical workforce shortages.”

According to a statement on Tuesday, tests included those by researchers at Biotec GmbH Laboratory in Germany, confirming the Aether inactivated 99.995 per cent of MS2 virus particles, used as a surrogate for SARS-CoV2, the virus that causes COVID-19.