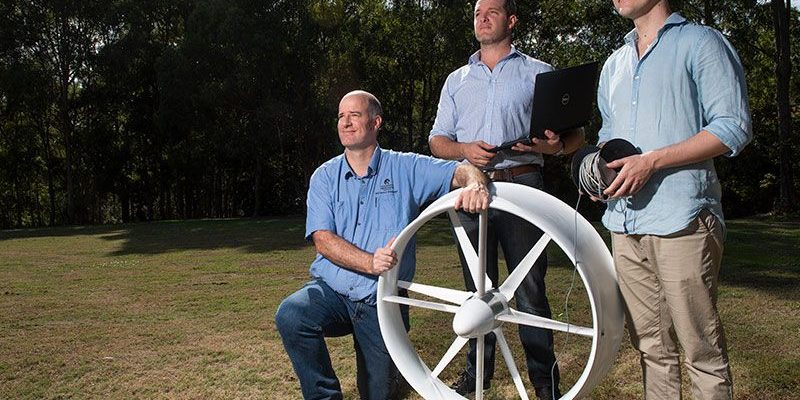 Australian engineering research has cracked the problem of diffuser design, allowing a doubling of efficiency for wind turbines, according to Diffuse Energy. Brent Balinski spoke to the company’s CTO and co-founder, James Bradley.

The project will support installation of ten 500 W turbines at off-grid telecommunications sites. After initially targeting yacht owners when getting started in 2018, telcos have become the focus for Diffuse.

Soon after the announcement we spoke to CTO James Bradley, one of three engineers/co-founders at Diffuse. He tells us about the story so far, the breakthrough diffuser design that “helps suck more wind through the rotor” to boost efficiency, executing on their plans next year, and more.

@AuManufacturing: Please tell us something about co-founder Joss’s Kesby’s PhD research and why his concept is a genius one?

James Bradley: Through his PhD, he came up with a design method that allows you to aerodynamically design both the diffuser and the blades all together, which is a pretty complicated aerodynamic problem. So in the past, people have kind of done the two separately and tried to jam them together and it hadn’t worked so well. He’s done it all in parallel and cracked it.

@AuManufacturing: A very difficult thing to model and understand mathematically?

James Bradley: Horrendous! A super-complicated dynamics problem and it uses a whole pile of computing power to try to work out an appropriate solution.

And then from then on, there’s the challenges of actually building the damn thing.

@AuManufacturing: I saw that you started out targeting the yacht industry. How did that happen and why have you ended up with a focus on telecommunications?

James Bradley: To be fair, yachts were probably just because if you looked around, that was the only place you really see prevalent use of micro wind turbines. Being a bunch of guys out of university we saw that as the obvious place to start. It was pretty hard to get a lot of people excited about that because although the yacht market is a big market, the wind turbine market in yachts is a fairly mediocre market. And then we almost by chance got tapped on the shoulder by the CEO of Vertel, who said ‘you guys need to come and chat with us about putting wind turbines on telecommunications towers.’ And to be honest, until that point, we never really thought of it. Then we realised once we started scratching the surface how big an opportunity there was, both locally and then globally. And you’re solving a much, much bigger problem. If you if you look at people on their yachts, for example, you are kind of solving ‘can I stay on my yacht for a couple more days in the Whitsundays?’ In telecommunications you’re saving three dollars a kilowatt hour in diesel. And that happens every day of the week, 365 days of the year.

@AuManufacturing: How many turbines are out there in the field?

James Bradley: We’ve only got one turbine with Vertel. We’ve had that turbine in a couple of forms now. They’ve been super helpful, giving us free access to one of their sites in Coffs Harbour as a testbed

We’re about to put more on their sites through the ARENA grant.

Last year we had a  New South Wales MVP grant, and we used Vertel as our customer with that. They have been super supportive right through our whole journey, to be honest.

@AuManufacturing: So just one turbine in the field being monitored?

James Bradley: We’ve got another couple of test sites around the place. So we’ve got one in a mine site up in the Hunter Valley, one with a company here in Newcastle. We’ve got our own test site with a couple of them. Port Stephens Council’s about to install one. Newcastle City Council. And Lake Macquarie Council, I think are on the cusp of doing something. And then obviously the ARENA project and a bunch of other things ready to go as well.

@AuManufacturing: So you need more data and validation before you start making bigger volumes?

James Bradley: If you look at it from the turbine perspective, we’re down to pretty minor changes now between production runs. We have some local manufacturers, and I guess I did the physical design and then also assembly. So that is a pretty close feedback loop. When I get annoyed because it doesn’t go right I know who to talk to [laughs]. Usually me. From the turbine perspective, there’s not too many changes. And then on the electrical system side, there’s still lots and lots of stuff that we’re learning. It’s pretty complicated to control a small wind turbine that moves really quickly. And so there’s some improvement still.

@AuManufacturing: Tell us about your supply chain and who’s making the carbon fibre blades and the diffuser housing and the electronics

James Bradley: It’s not really kind of an advanced manufacturing play. We’re using fairly well-trodden paths to make the components. For example, a diffuser is rotomolded. So like you would a water tank or a wheelie bin. So I guess for the company in Sydney who does the role of molding, which is Rotadyne, for them to be making a part of a cool little wind turbine is a bit different for them and a stream of revenue that they otherwise wouldn’t have.

And then, the foundry that does some of the aluminium casting for us, they’ve been there for 50 years doing fairly traditional bits in aluminium casting, now they’re making bits for a small wind turbine. And the blades come from a company in Queensland, but they actually outsource that manufacture to China, unfortunately. And then there’s a bunch of machining that gets done by a local company here in Newcastle. And then all the stainless steel parts are made by the same manufacturer. I go in there and they’re all excited about making parts for wind turbines, rather than the same components for bits of mining gear, which is what they normally do.

@AuManufacturing: You have a larger model turbine on the way next year?

James Bradley: We’ll probably do that towards the end of next year. We’ve kind of promised ourselves that we would get a certain threshold of field data on the current one before we push onto the next one. Just so that we can make sure we’ve ironed out everything on this one before we, you know, jump into another design hole. It’s likely to be towards the end of next year for that one. It’s should be pretty much very similar to the one we’ve got now, and about 60 per cent larger.

The reason for that is that there are some standards around telecommunications on the size of equipment you can put on site.We’re going to very deliberately set it just under that so that it just removes a whole pile of burden from approvals to install them.

@AuManufacturing: Why did you choose a servitisation model, where you’re selling a subscription rather than a product?

James Bradley: For a couple of reasons. One is we’re kind of replacing an ongoing cost. In the telecommunications market we’re replacing diesel, and they pay for diesel on a service-based agreement. So we’re kind of replacing an operational cost with another operational cost. And that means that they can do rapid deployment without a whole pile of capital cost. The other thing is from our perspective, it means that we always have an income and it keeps us around. We could go and sell a million turbines next week and shut up shop the next day and from a customer perspective, they’ve got no support after that. So the subscription kind of builds you into the whole system and keeps you around to continue servicing it. For customers it builds a little bit of confidence in a new business.

@AuManufacturing: I’ve heard interviews where the company has mentioned that its technology could be useful in other applications where you need to move fluid or air. Where’s the next industry you might look to, for example HVAC?

James Bradley: You get efficiency gains on the turbine by using that diffuser. That doesn’t necessarily scale all the way up to huge turbines. So you’re never going to see a 100-metre turbine with a diffuser around it, because the infrastructure cost of building the diffuser will just be so horrendous.

Probably about three metres in diameter would be, to my mind, as big as you would build the diffuser. After that, we’re probably clever enough to build an open-bladed turbine that’s just as efficient.

The cool thing is the method that we use can be used for any kind of blade set in air. That’s a very long way down the road. We’ll get wind turbines out of the way first.

We used to speak about all these other things that we could do, but there’s quite a few years ahead of us in wind turbines. So we’ll kind of leave that to the side.

James Bradley: We’re now at the point where 2021 will be kind of a first opportunity to properly deploy. The last three years have sort of been a lot of R&D and getting ready. 2021 is the year where we should actually be off to a good trot and put a whole pile of turbines out there and actually do some good with them.

The ARENA project is to build confidence in the telco industry. Telecommunications is far [broader] than most people may imagine. Everyone thinks of Telstra and Optus, but there’s some 280 players in the Australian telecommunications market. So obviously the end goal is Telstra and Optus and NBN Co, who are the ones with thousands and thousands of sites. The end goal is to get to them, and the ARENA project is kind of designed to give them confidence to jump on board. But there’s a lot of work for us to do with the many other players in the market.

We’ve got lots of interest in talking to lots of people, we’ve spent this year setting up a lot of relationships with those people, so next year is about deployment.