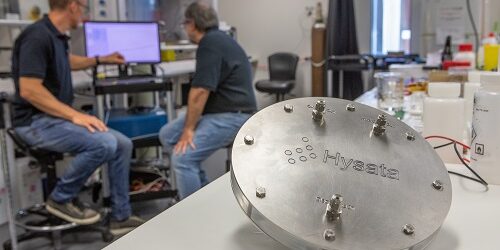 Hydrogen technology company Hysata has announced completion of an oversubscribed $42.5 million Series A round, which it says will be used to expand its team and build a pilot production facility for its novel electrolysers.

“The support of this international syndicate of clean energy practitioners and investors validates our core technology and our approach to scaling and mass manufacture,” said Paul Barrett, CEO of Hysata, in a statement.

Hysata launched in June 2021 with seed funding from the IP Group and the CEFC – its first investment in green hydrogen.

According to the company it is on track to deliver hydrogen “well below” $2 per kilogram when it reaches the manufacturing stage of electrolyser development.

In March this year its scientific team, led by CTO Professor Gerry Swiegers of the University of Wollongong, published results in the journal Nature Communications showing its capillary-fed electrolysis cells “delivering 95 percent overall system efficiency” and “on a clear pathway to commercialise the world’s most efficient electrolyser and reach gigawatt-scale” output by 2025.

“The company has redefined the core cell architecture for alkaline electrolysis, producing a practical and scalable solution with game changing efficiency.”

In an interview with @AuManufacturing in March, Swiegers and Barrett said they expected to establish a pilot plant this year, and “to have a manufacturing line and our first product with customers in 2025.”