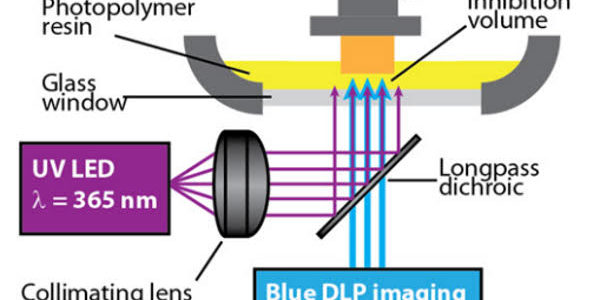 Inventor Timothy Scott is commercialising a new 3D printer and resins, with speed, strength and other possible advantages over current light-based approaches. Brent Balinski spoke to Scott about the possibilities of volumetric production.

And Associate Professor Timothy Scott was announced as a veski innovation fellow, earning three years’ support from the Victorian government and Monash University to progress a novel method of 3D printing which he developed at the University of Michigan. It has gained attention as an ultra-fast way to polymerise parts in a resin vat.

As a growing family of technologies, each with different strengths and weaknesses, additive manufacturing generally remains too slow for most production scenarios. Scott is among innovators around the world trying to change this using resins and light-based curing.

“Currently what’s called 3D printing is not really 3D printing… If you’re doing an extrusion type, then basically you’re just rastering in essentially one dimension, or you’re doing things layer-wise, which would be sort of like a stacked series of 2D,” the chemical engineer tells @AuManufacturing.

His method uses “photoactivator” and “photoinhibitor” additives in a pool of resin with a glass bottom. A blue light and a UV light are shone through the glass, building a part in the pool. The blue LED light hardens the liquid, the UV stops this.

Pumping up the volume

It is far from the first or only technique to cure polymers with light, but the use of photoinhibitors with UV could offer some unique advantages, for example around stopping the bottom of a part from sticking to the glass window and ruining a job. This non-curing gap is deeper than other methods (for example those using oxygen) so the resin used can be much thicker, meaning an increased possibility of much stronger parts and decreased possibility of the parts’ base getting gunked up.

And then there is the impressive speed. Rather than builds taking hours or days for a job, a paper published by Scott and his team in January in Science Advances describes production rates of two metres per hour being achieved.

“I’m pretty confident that we can go faster than any of our contemporaries; so that would include Carbon, 3D Systems, EnvisionTEC. But that’s not really our thing,” he explains, adding that garbage made quickly is still garbage.

“What I think genuinely differentiates us from others is the materials that we’re able to use. Resin viscosity has long been a limiting factor in stereolithography, where the resins need to be really quite fluid in order to be printable… With our approach we’re able to use much more viscous resins. And that enables us to basically go to composites and achieve thermal and mechanical properties that really can’t be matched by just sort of straight resin systems.”

Other groups around the world attempting to better current lithography methods are around EPFL in Switzerland and Lawrence Livermore National Laboratory/UC Berkeley in the US. Both are inspired by computed tomography (CT) medical imaging. Each uses multiple beams of light to cure an entire 3D shape, rather than building it up layer-by-layer.

Scott says these methods can no longer be called “additive” – as they do not build up layer by layer – but are something like “true” 3D printing. Whatever the term used, there are still issues to be sorted out around the absorption of photons used.

“Some of your photons have to get absorbed by chemicals within your reaction mixture. So that means that you’ve got a light intensity of gradient through the mixture. So that’s obviously kind of an issue to make a large object,” he explains.

“That’s problematic… Another issue with it is that as you’re projecting light into this vat, as this stuff is reacting, it’s changing refractive index. And as that happens then basically you start getting a whole range of weird optical effects. That is super-challenging to get around.” 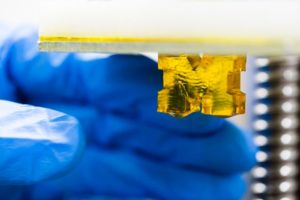 Scott has returned to the university where he earned a PhD in materials engineering in 2006, investigating photopolymerisation of composite helms for Huon class Minehunter ships. After this, he held positions at the University of Colorado, before joining the University of Michigan’s chemical engineering department in 2011.

Work on novel 3D printing methods with U of M’s Professor Mark Burns came out of competition at the university sponsored by Procter and Gamble – “perhaps two or so years ago” – encouraging new approaches to radically improve printing speeds.

The collaboration with Burns continues, despite the move back to Monash in July. Scott estimates a full-scale prototype printer will be ready to go in roughly six months while materials development carries on in the background.

After a prototype is finished, he expects to be getting machines to customers “six to 12 months” after that.

“There will be activity in Michigan, but there’ll also be… a site here,” says Scott.

“I would hope that we’re actually building instrumentation and selling stuff to customers from a location here in Victoria.”

“The next step is to then basically demonstrate, and hopefully start getting some orders, seek out funding from institutional and strategic partners, and then start building and scaling up.”