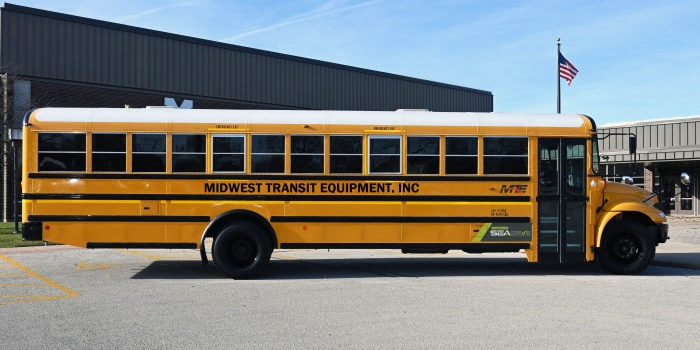 The achievements of six small to medium businesses have been recognised at the Defence Teaming Centre’s (DTC) Awards Ceremony, which mark the DTC’s 25th anniversary. PMB Defence won DTC’s Resilient and Adaptive award, while the Teaming award was awarded to Daronmont Technologies, Zenith Custom Creations, Cold Logic, and APC Technology. Axiom Precision Manufacturing won the Growing/Emerging award, for successfully pivoting from a 90 per cent automotive business to a 90 per cent defence manufacturer in five years. As part of the celebrations the DTC launched their enhanced Defence Industry Leadership Program (DILP).

Truck and bus electric drive train manufacturer SEA Electric and Midwest Transit Equipment (MTE) have partnered to update 10,000 US school buses with battery-electric power-systems, the biggest deal of its kind to date. School bus dealer MTE will be able to provide clients with a ‘near new 100 per cent electric bus at a fraction of the cost of a new electric school bus’, according to SEA Electric. The deal will cover both Type A and Type C school buses (pictured), with the deliveries scheduled over the next five years. These buses will be powered by SEA Electric’s SEA-Drive power system, extending their service life by ten plus years.

Specialist fabric treatment chemical developer Alexium International has made its first sale into the body armour market. The company, whose chemicals are best known for moving heat away from the user in bedding markets, has commercialised its products with body armour systems manufacturer Premier Body Armour. When fabrics are treated with Alexium’s Eclipsys chemistry, heat is transferred away from the wearer at twice the normal rate, reducing thermal stress of the armour. Premier will launch the first new products on its website in coming weeks.

The Central Coast Hydrogen Food Cluster and Star Scientific have announced the first applied research project of Star’s HERO technology, which will using hydrogen to provide heat for industrial-scale sanitation with Mars Food Australia. HERO uses a “non-polluting catalyst” to create zero-emission heat from hydrogen. The 18-month trial is part of the Central Coast Hydrogen Food Cluster launched in October, a partnership between Star Scientific and Central Coast Industry Connect. Star would undertake extensive testing and consultation with Mars, regulators and relevant government agencies during the development process of the pilot. Once completed, “it will provide a foundational framework for the development of other heat sources used in food manufacturing.” Star’s innovation won them the “Emerging Technology of the Year” at the S&P Global Platts Global Energy Awards a year ago.

Novel Australian-developed hydrogen storage tanks to be trialled in 2022

Advanced materials startup Rux Energy is heading a project using “metal-organic frameworks” for hydrogen storage tanks in collaboration with University of Sydney and the Innovative Manufacturing CRC. The materials offer “high-performance adsorption of H2”. and will be integrated into tank prototypes “for trials and testing with SME and large industry partners” in 2022, according to a statement from IMCRC on Tuesday. The project began in March and was supported by a $100,000 IMCRC activate grant, which Rux founder and CEO Dr Jehan Kanga said “has catalysed more than $4 million in investments over the next three years”. Kanga’s team aims to deliver “affordable green hydrogen for heavy and long-distance electric vehicles by 2025.”

Tyrecycle officially opened its new $10 million plant in Erskine Park, NSW, this week. The site will have capacity to produce 10,000 tonnes of rubber crumb and 40,000 tonnes of tyre-derived fuel annually. The factory opening comes ahead of a baled tyre waste export ban coming into effect on December 1, and was assisted by a $2.9 million grant from the federal and NSW governments. The funded upgrade is scheduled to be complete in July 2022, and will support 20 new jobs during construction and a further six during operations. The crumbed rubber produced could be used in roads and rubber-based surfaces such as athletic tracks, sporting fields and playgrounds.