Plant-based startup says we need to grow the (meat) pie 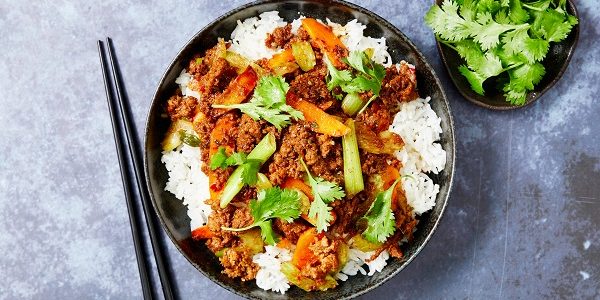 V2food — makers of the Rebel Whopper patties you may have noticed in Hungry Jack’s stores since late-last year — is preparing to open its factory, get into supermarkets, and target the export market. Brent Balinski spoke to founder Nick Hazell about the potential of plant-based meats.

There are abundant “Australia vs USA” examples you could lean on to support an assertion that we’re generally mellower than our American friends.

One of them might be the conversation around the emerging plant-based meat category. The US meat industry has bought up space to question the merits of its plant-based rivals. As of late-last year at least half of states had introduced legislation to ban the use of “meat” or “beef” on plant-based products. Over here, the National Farmers Federation and Nationals party have lobbied for labelling law changes affecting products designed to emulate animal-based meat and milk, and certain commentators have done the same, but things are generally more restrained.

“I think in the US there seems to be some sort of trench warfare between sort of the vegan movement and the meat lobby, and it’s terribly unfortunate,” says Nick Hazell, founder and CEO of v2food.

“And luckily in Australia… I think we’re taking a much more considered view.”

Unlike Impossible Foods – which has raised $US 1.3 billion so far and has a mission of “completely replac[ing] animals in the food system by 2035″ – v2food pitches itself as a friend of the traditional meat industry, which it says will not be able to keep up with a rising international demand for protein on its own.

“My mission is not to turn the world into vegans, particularly — obviously the vegans are a very important part of the market, but the bigger market is those people who are reducing their meat consumption,” Hazell tells @AuManufacturing.

“They’re not necessarily going to ban meat from their diet, but they’re reducing their meat consumption… To feed 10 billion people with the growth of meat consumption, we need another meat industry, not [to be] destroying the one we’ve got, because then we’ve doubled the problem.”

“To feed 10 billion people with the growth of meat consumption, we need another meat industry, not [to be] destroying the one we’ve got, because then we’ve doubled the problem,” believes Nick Hazell

V2food was launched in October last year, and is a joint venture between Competitive Foods Australia (the parent company of Hungry Jack’s) and the CSIRO’s Main Sequence Ventures. Its series A raise attracted $35 million, and it has sold well north of 2 million of its patties through Hungry Jack’s so far. Its products are also sold through Soul Burger stores and, as of last month, through Marley Spoon in meal kits.

The company blends ingredients such as protein from soybeans, coconut and vegetable oil, and plant fibres to create its products, developed with the CSIRO to taste as near as possible to animal meat. The soy protein isolate is imported, as there is currently no such protein processing industry locally.

The value-adding and export opportunities through the new category are vast, believes Hazell, who is an aerospace engineer by training and has a background in R&D for multinational food and beverage companies.

“We’re a great grower of grains and legumes in Australia. We [also] have the potential to be a really big carbon sink for the world, potentially, through our agriculture,” he says.

“But we don’t add a lot of value in Australia.”

According to a CSIRO Futures report published last year, alternative proteins are a growth category, expanding five per cent annually, and offer a potential $4.1 billion in domestic sales, $2.5 billion in exports and $5.4 billion in environmental savings annually by 2030.

V2food is currently manufacturing on a pilot line at CSIRO’s Werribee branch. It is building a factory at Wodonga, preparing to open in September, and gearing up for a Series B to continue its expansion. It is currently in talks with the major supermarket chains, aiming for retail sales shortly after the factory has come online.

Is the collection of fake meat offerings at saturation point in supermarkets? Hazell doesn’t think so, saying it “is under-performing versus other countries,” and adding that his company aims to be priced similar to meat, which is necessary to address this perceived under-performance.

“Otherwise we will never be mainstream and this will never take off. That’s part of our conversations with the supermarkets. We don’t want to be in a niche in the vegan aisle.”

Again, the pitch is around inclusivity – targeting consumers of regular meat who might have environmental concerns or just want something different – rather than disrupting older industries.

There’s potential in plant-based meat to give farmers a non-commodity market for what they make, to grow a new industry in Australia, feed a growing global population, and to do more with less. Hazell adds that it’s hard to make like-for-like comparisons, as much of Australian beef is grass-fed, but plant-based meat uses ten to 12 times less grain or legumes compared to feedlot meat.

There’s a “clean and green” reputation that our food exporters enjoy, and an export success story in the beef industry – with three-quarters of what’s grown here sold overseas – to extend. There is no “beyond meat.” There’s just more meat, and more people around the world that will need it, believes Hazell.

“But that does mean that we should be manufacturing in Australia with Australian standards, Australian science, the CSIRO behind us. That gives us credibility in the markets that we’re exporting to… And it’s an Asian target for us. That’s where the growth in meat consumption is happening.”