Profiles of success: the Brisbane company charging ahead in the race to power tomorrow’s cars

Electric cars sometimes get described as “batteries on wheels”. A charged 60 kW vehicle could potentially power a home, including its air-conditioning, for four or five days. The possibilities of “bidirectional charging” through vehicles are being taken seriously by Japanese automakers, and widespread adoption of EVs could eventually – and drastically – change the ways we use and buy electricity.

None of this is news to Brisbane’s Tritium, which is growing quickly to keep up with both current demand for its fast DC chargers and the need to deliver the next set of charging innovations.

The famously slow take-up of EVs in its home country hasn’t been an impediment to Tritium, which has customers in 29 nations and exports almost all of what it makes.

“Australia has been a complete backwater with its vehicle uptake: that’s certainly borne out in statistics, so hopefully we’ll see that turn around,” CTO and co-founder James Kennedy tells @AuManufacturing.

“From a business point of view, I don’t think it bothers us too much. A massive percentage of our equipment is going overseas, but certainly, personally, it’s a bit disappointing.”

Last week Tritium opened a new R&D centre at its headquarters, citing a big jump in its engineering workforce.

At Tritium, the engineer is king. According to the company – which was founded by three electrical engineers – late last year they were hiring a new engineer every week on average. Of a workforce of over 300 globally, “the R&D and engineering teams [are] the same size as the executive, sales and marketing teams combined”.

The R&D centre is home to custom-made testing equipment, and tailor-made to accommodate the highly specialised power electronics the company makes.

“You end up occasionally having to forklift around transformers that weigh a few tons,” explains Kennedy.

“A lot of our stuff is regenerative type loads, which can essentially put the power produced by the charger back into the grid again. You end up recirculating everything… That means your grid feed only needs to make up the losses, rather than making up the entire power supply.

“It means we can run 500 kilowatt charging equipment 24/7 while only consuming 20 or 30 kilowatts off our grid connection.”

“We had one of the few motor inverters in the race that didn’t blow up regularly,” the CTO explains.

The superior inverters found a market among other solar car enthusiasts, and later work on liquid cooling systems for larger solar car inverters “formed the guts” of the fast chargers their company released in 2013.

The cooling innovation led to more compact, lighter chargers than competitors, and also had the advantage of being sealed to IP 65 standard.

Manufacturing takes place at Tritium’s three sites (Brisbane, Amsterdam and Los Angeles), but the vast majority of this goes on in Brisbane. It is here that a one-shift-per-day operation produces roughly 35-40 50 kW chargers (the first fast charger product) and the same amount of a newer 350 kW charger (released last year).

Tritium’s supply chain is reasonably complex, says Kennedy. Circuit board assembly is in the Philippines, magnetic assemblies are out of China, high-powered silicon products are out of Europe, and other semiconductor parts are from the US. The aluminium enclosure and vacuum-formed plastics are sourced from Brisbane and the Gold Coast. 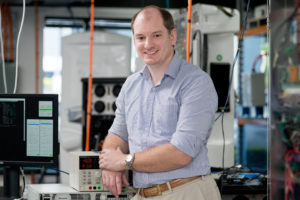 Current development work includes a project in the US on ultra-fast chargers that can run directly from a medium-voltage grid rather than a transformer, charging for trucks and buses (likely to be between two and three megawatt once standards are developed), and bidirectional chargers.

Charging equipment is a fast-growing industry, and McKinsey estimates “40 million chargers across China, Europe, and the United States, representing an estimated $[US] 50 billion” will be needed up to 2030.

In light of the huge growth and the strong competition – from startups to multinational giants like ABB – there are good reasons for all this R&D investment.

“There’s some very interesting stuff [coming] that sounds almost like science fiction but in reality is probably only two or three years away,” says Kennedy, citing vehicle-to-house scenarios, where cars batteries step in when the sun hasn’t shone in days and a household solar battery has been depleted.

“There’s some very interesting effects that you will see coming out from that availability of cheap, small storage packs at home combined with bidirectional charging in electric vehicles.”