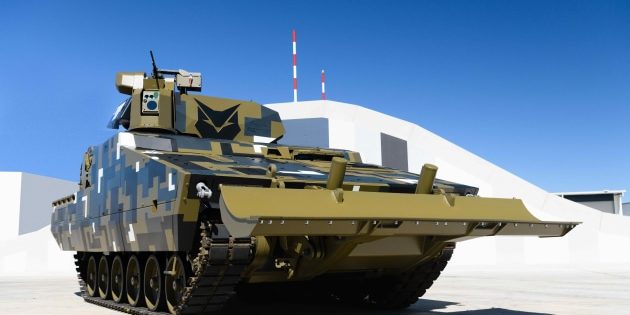 Defence prime Rheinmetall has debuted the new Lynx Combat Support Vehicle, designed and made at its Redbank, Queensland MILVEHCOE facility and featuring input from over 100 Australian suppliers.

The Lynx CSV is based on Rheinmetall’s Infantry Fighting Vehicle, and is its proposal for the LAND 400 Phase 3 program.

Rheinmetall Defence Australia Managing Director Gary Stewart described the Lynx as, “uniquely Australian as a “work horse” vehicle, even taking on the distinct function of a ute.”

The vehicle has been designated Made In Australia by the Australian Made Campaign, and was made from Australian steel at MILVEHCOE, where RDA manufactures the Boxer CRV for Land 400 Phase 2.

Stewart said the Lynx included additional fuel capacity for refuelling of other vehicles in the field, as well as a rooftop-mounted crane with capacity of over five tonnes, allowing it to pull other vehicles.

“The modular remote weapon station can be configured with a range of weapons and ammunition from 7.62mm, 12.7mm up to 40mm grenade,” he added.

“The Lynx CSV will be positioned for export from Australia to allied armed forces.”

The LAND 400 Phase 3 will acquire and support as many as 450 Infantry Fighting Vehicles “and a Manoeuvre Support Vehicle capability comprising up to 17 vehicles”. The two contenders — with the winner expected to be selected next year — are Hanwha Defense Australia and Rheinmetall.

Navantia Australia and UGL bid for amphibious ship build
May 12, 2022