The Australian AM technology promising to simplify sustainment 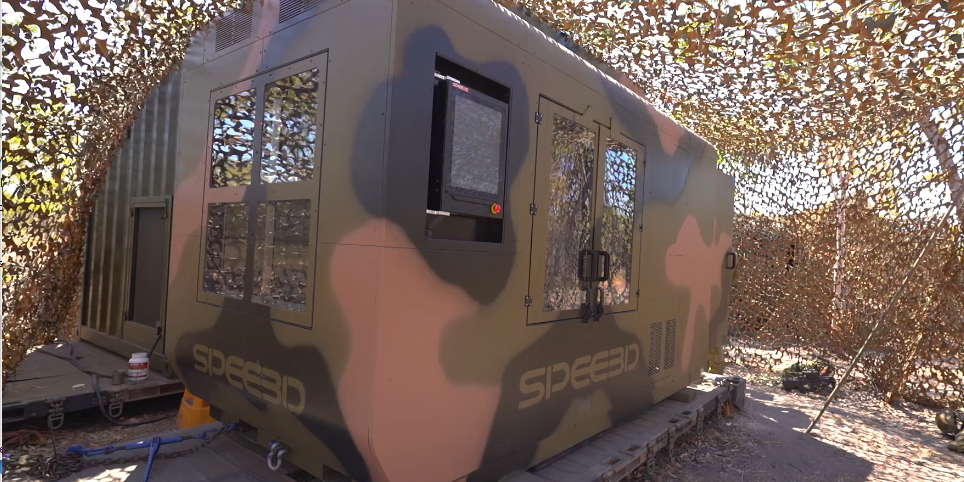 Our editorial series – Equipping Australia’s armed forces – continues with a look at Spee3d, an additive manufacturing SME proving its technology for expeditionary use. Brent Balinski spoke to co-founder Byron Kennedy about their award-winning work with the Australian Army and the potential in defence and other markets.

Byron Kennedy and Steve Camilleri, co-founders of Spee3D and both long-time manufacturing entrepreneurs, saw a lot of limitations to laser powder bed fusion keeping it out of volume production.

Melting metal powders together layer-by-layer can create intricate shapes and deliver light-weighting and other useful properties to parts through lattice cells. It has proven useful for medical implants and elsewhere. It also remains very slow and very expensive.

During a visit to CSIRO — which has licensed cold spray IP to Titomic — a few years ago, the Spee3D founders found their answer.

Cold spray was discovered by Russian Academy of Science researchers in the 1980s, and later adopted by the US in defence for applications such as repairing Black Hawk gearboxes.

The technique — with powders blasted through a nozzle at supersonic speeds, propelled by gas or compressed air and fused to a surface without melting — remained limited to repair and coating.

“It had been talked about for a long time… the [obstacle was] that the software is very sophisticated to be able to actually turn cold spray into a part,” Kennedy tells @AuManufacturing.

“We looked into the cold spray technology and then added the smarts to be able to free-form parts. And we’re the only ones in the world that actually do that.”

This has opened up opportunities closed off to laser-based metal AM.

Spee3D’s machines contain an industrial robot holding a build platform. The robot moves the platform and a metal shape is built up on it while the nozzle remains still.

According to the company, they can lay down up to 6 kilograms of metal powder per hour in this fashion. Though cold spray offers potential with exotic combinations of metal, their focus is on copper, 6061 aluminium and 316 stainless steel, while offering other powders.

There are about a dozen of their machines in use worldwide, with the company in a phase of rapid growth and expecting its workforce to increase from a little under 30 currently to over 50 in the next 12 months.

While universities have been early adopters and Spee3D has sold to printing bureaus, defence has emerged as their fastest-growing sector, and a goal is growing business there over the near-term.

It sees opportunities in three streams: selling directly to defence forces, primarily for expeditionary use but also on bases; selling to primes for sustainment; and sales to SMEs to support primes or defence directly.

A 12-month trial with the Australian Army earned Spee3D an SME Innovation Award, presented at the Land Forces 2021 expo earlier this month. Spee3D is also part-way through a two-year trial with the Navy.

The two trials at Mount Bundey in the Northern Territory gave both Army and Spee3D some valuable lessons on expeditionary use.

Kennedy says a sweet spot for prints was around “industrial parts” for replacement, including tools, brackets, pumps and steps.

Replacing an armoured vehicle’s latch holding a back door shut, which may have broken off after going through a ditch, is one example.

“It’s repairing those sorts of things or building new ones… that may not be available,” explains Kennedy of the logistical benefit.

The trial also drove development around user considerations at Spee3D.

The “crafties” — in trades such as electrician, mechanic, welder — have technical skills, but may not have 3D printing in their background.

Helping them get the hang of an AM workflow led to Spee3Dcraft, a desktop simulator built using the gaming engine behind Fortnite. Kennedy says the free program can give a user the level of knowledge to walk up to a printer and have an idea what to do after just an hour of simulation, from part design to heat treatment and machining.

Asked if there was a need to ruggedise their machines for field use, Kennedy says yes and no, adding that an laser-based AM unit would probably be shaken to bits before making it outside the base.

“We always had the vision to put the sophistication into the software and therefore make the hardware very robust and reliable,” he says, adding that there were individual adjustments around tie-down points or waterproofing, but nothing substantial.

“That’s why on our equipment we have ABB robots, and Siemens PLCs and pneumatics. It’s all industrial kit.”

The co-founder sees military work — similar to the oil and gas market in keeping critical infrastructure running — as continuing the development of the company’s technology. He believes that after being proven in industries with a focus on maximising uptime in remote locations, manufacturing will come around to the benefits of cold spray.

It will also remain the case that for metal AM, certain tools will suit some jobs and not others.

“Military has some advantage in that they can try things and they can be an early adopter. It needs to work, of course, but they are in some ways an early adopter in this critical infrastructure market,” Kennedy offers.

“So certainly for us, we do see that as key. I wouldn’t think so for other [printer] market segments. For instance, laser powder beds — you’re not going to see many laser powder bed parts on a tank. It may be a nice demo to show you’ve done it, but that’s about it. It’s just a different application.”