Adelaide’s Fleet Space Technologies is one of the success stories in Australia’s burgeoning space startup industry. Brent Balinski spoke to CEO and co-founder Flavia Tata Nardini about its recent $10.8 million funding round, and the current shortage of available launches.

Interest in private space business has never been higher here. “NewSpace” – much lower-cost, faster moving, and smaller-scale than your dad’s space industry – has been identified as an area where bold Australian startups can seize new opportunities.

One of the standouts so far is Fleet Space Technologies, which last week announced news of a $10.8 million funding round, with backers including Momenta Ventures, Horizons Ventures and the Kennard family.

Fleet began in 2015 with a vision to create the “digital nervous system” for the awesomely connected Internet of Things world of tomorrow. Its solutions include low-cost, low-power communications nodes and gateways, and plans an eventual constellation of 100 nanosatellites in low earth orbit. It currently has four satellites in space, carried there on three flights from various providers in late-2018.

“I think rockets and launches are the bottleneck of the industry still,” admits founder and CEO Flavia Tata Nardini, who worked as a propulsion engineer at the European Space Agency and TNO before moving to Australia in 2013. When she arrived there was one local space startup – Saber Astronautics – though now there are dozens.

For those wanting to launch, it can be tough. Demand exceeds supply. There is no local provider, though Queensland’s Gilmour Space is working on it.

“Most important is to launch more satellites,” Tata Nardini tells @AuManufacturing of where new investment in Fleet would be deployed.

“It’s a bit of a mix. Of course we want to grow as a team… We have done a lot with a small team so far. We were 10, 12 people, and are launching the four satellites and manufacturing, and sending equipment [into orbit.]” 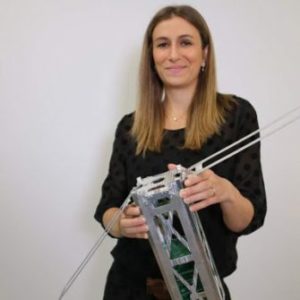 Fleet is developing a new generation of its software-defined radios, with increased efficiency, to travel on its satellites. These payloads are assembled by Fleet, with the satellites made by Pumpkin Space Systems in San Francisco. Fleet’s four operating CubeSats are a mix of 1.5U and 3U- sized, and it plans to build 6U versions in future to increase their capability.

IDC research predicts the collection of connected low-power devices on earth will be 14 billion by 2025. Interest in Fleet’s satellite-enabled, low-bandwidth communications products, using the LoRaWan standard, have been high. Current customers range from Australian resources and equipment hire companies to a bee farm in the United States.

Within 24 hours of opening, their “Project Galaxy” offer in February – $US 2 per device per year, with 500 kb of data a month – attracted a million registrations, with almost 40 per cent of these from the US.

While scaling up, the plan is to increase its use of local suppliers, says Tata Nardini, who adds that local manufacture has not been a focus so far.

“Fleet is a data provider, a constellation manager; we don’t need satellites, we need the data, so there’s not been a lot of manufacturing on that side,” she says.

“There are some changes that are happening in the works. We are not announcing them yet, but the intention is to start bringing some manufacturing here.”

The week before last, the team headed to the US to examine possibilities for the next launch, with a decision to be made “probably… in the next couple of months.”

Launches remain a major hurdle for small satellite businesses such as Fleet. The founder sees hope in the August SmallSat Rideshare announcement by SpaceX, which has so far focussed on ferrying larger satellites. According to SpaceX, the first such mission could happen late-next year. Several newer companies have also emerged recently to target the unmet demand.

Launch availability in the competitive small satellite world is a make or break issue for a company. Agility has been an important ingredient for the emergence of CubeSats. It’s hard to go through the “design, build, test” loop without real-world results to learn from.

Companies like Fleet are eager to see a local launch provider – and access to regular launches – emerge.

“And there are issues with launching outside your own country. What I believe is that Australia geographically is in a good position to launch rockets, and I believe that we need more rockets because we need more opportunities to get to space faster,” Tata Nardini says.

“Last year, we waited months for SpaceX launch. Months! And you can’t spend months, like nine to 10 months, waiting for something.They have to get into space as fast as possible to try the technology, make mistakes, keep moving, right?”