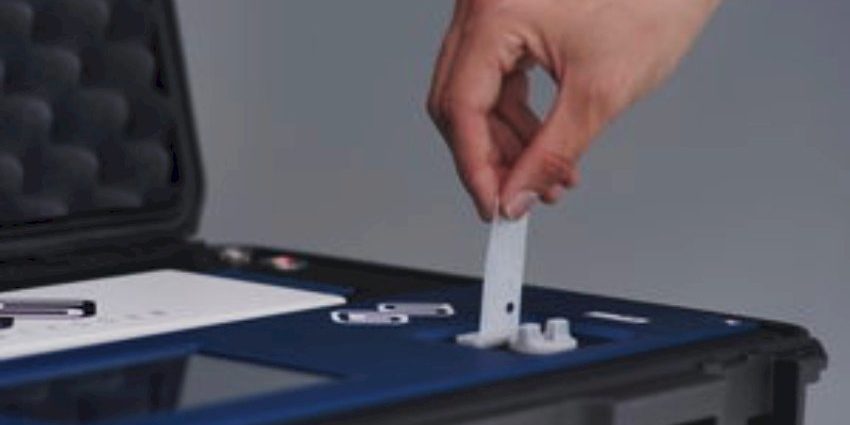 In recent weeks, we have reported on manufacturers applying their expertise to developing Covid-19 tests. Brent Balinski spoke to Samantha Ollerton of GreyScan, which is building a trace detection device for surfaces, where the virus can linger for days.

March was a month where everything changed. Whatever your business, it was time to rethink what you’re good at, and if it could be of use in a completely unfamiliar context. The word many of us have grown sick of — pivot — is inescapable.

Samantha Ollerton had recently joined GreyScan — part of successful commercialisation business Grey Innovation — to get the company’s first product out into the world. The separation science IP behind this had been licensed from University of Tasmania in 2014, and after several years, $25 million invested and various innovation awards, the explosives scanner  was finally launched in March.

Ollerton had just returned to Port Melbourne from an Asia trip.

“The first call I made when I got back and literally as the borders were starting to shut was to the original team that Grey Innovation had worked with at the University of Tasmania to start to thrash through the scientific due diligence of, ‘can we do this?’” she tells @AuManufacturing of adapting world-first inorganic chemistry analysis methods to SARS-CoV-2, the virus causing Covid-19.

“What’s been done in the lab? How was this used in a laboratory setting to do diagnostics? And can we translate that into re-engineering our ETD-100 for the purposes of virus detection?”

The “capillary zone electrophoresis” method behind their new product had been successfully used in lab conditions to detect viruses such as rhinovirus (usually behind the common cold.)

Now it was time to do the opposite of the security industry’s practices since 9/11, says Ollerton, who has a lengthy background in forensics and security and came to her role in October from Rapiscan.

“There [was] a drive to develop and manufacture products that could be re-engineered and repurposed from other industries,” she says.

“For example, every imaging system you see at an aviation checkpoint today originated from a people imager for the healthcare system.”

Due diligence done — and a team of nine specialists in virology, epidemiology, biology and chemistry assembled and a program of work written up —  after three weeks they began deconstructing their explosives scanner.

“We’re now really optimising some of the components, the chemistry of separation, the detector itself, as well as the sample inlet to then re-engineer it for viruses,” says Ollerton. 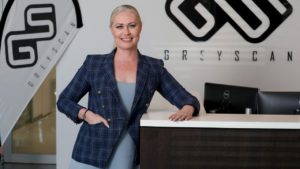 “if we can have a protocol where we can establish cleanliness of not just the people, but also the produce that gets exported, I think he’s only going to strengthen the export business of Australia.”

The company recently announced a $260,000 CSIRO grant to support the work with University of Tasmania specialists.

Ollerton reckons that in eight weeks they will have an engineering prototype, then a “bells and whistles” prototype for testing in the field six months after that.

“Then in terms of a scale up to manufacture, we’re planning to build on our capacity here in Australia to augment that; so we can fast track our ability to build into the thousands of systems,” she adds.

“But we also accept that this is a global product and a product that’s going to be needed everywhere you can imagine. We’re also looking at how we can expand manufacturing capacity overseas as well.”

There are various measures to manage Covid, such as social distancing, contact tracing and sanitation methods. There is currently nothing to gauge the effectiveness of the latter on a virus that can survive on surfaces for days.

This will be important for businesses to operate confidently as they return to life as it was before March.

For Ollerton’s company, the era has seen half of the team seconded to Grey Innovation’s “notus” project, fulfilling a federal government order for 2,000 invasive ventilators and involving companies including ANCA, Bosch Australia Manufacturing Solutions and Circuitwise. The first ventilator came off the line last week.

Ollerton believes that there’s a current opportunity for exporters to develop standards around export safety, and to play a part in that.

“One of the things I think that’s going to be really important, especially with the capability in this country, is we can export our goods overseas confident that they are Covid-free,” she says.

“All of the trouble you see in the United States around meat production — if we can have a protocol where we can establish cleanliness of not just the people, but also the produce that gets exported, I think he’s only going to strengthen the export business of Australia.”