Hearing Bob Dylan sing Hurricane for the first time. Stumbling across the TV series Fleabag. Andrew Forrest’s recent announcement that he will build a factory in central Queensland, with capacity to make 2 gigawatts of hydrogen electrolysers a year.

Geoff Brooks, Director of Research at Swinburne University’s School of Engineering, insists he is rarely amazed, but the above three examples did the job.

Professor Brooks is interested in hydrogen’s possible role in decarbonising industry, but says cost (and a related lack of scale) are two giant hurdles to the much-hyped gas making a difference to steelmaking, an industry that currently contributes an estimated 7 per cent of the world’s greenhouse emissions.

“That is enormous — enormous — absolutely, incredibly bigger than what we currently have,” he tells @AuManufacturing of what 2 gigawatts of hydrogen represents.

“There is this issue of scale [to overcome.] People are going to build these things and how much are they going to cost? And if they can get the cost down because of scale, fantastic.”

To put what’s currently made and what’s needed into perspective, a 20 megawatt Cummins electrolyser installed for Air Liquide in Quebec in January was reportedly the world’s biggest unit. The biggest in Australia right now? 1.25 megawatts.

In a presentation about green hydrogen in steelmaking — “decades away” — Bluescope said last month that it would need 1,400 megawatts output just to power its Port Kembla site. This would represent nearly half the world’s total hydrogen electrolyser capacity of 3 gigawatts. (McKinsey tips this to reach 100 gigawatts by 2030.)

Boutique volumes usually come with boutique prices. The estimated current cost of $US 4 per kilogram for green hydrogen will doubtlessly come down, but is nowhere near where it needs to be.

“[$US 4] would add a tremendous cost to the cost of steel,” explains Brooks.

“People are talking something like 40 to 50 per cent increase in cost — there’s a lot of arguing about that [figure,] but nobody would argue it wouldn’t increase dramatically.” 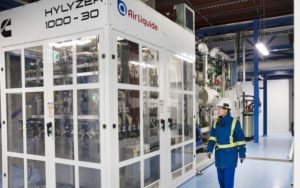 He adds that though he’s old enough to have seen the promise of the hydrogen economy emerge a couple of times before, notably after the oil shock in the 1970s, this time it seems different.

“It does actually feel like a revolution is poised to occur,” says Brooks.

“So it is an exciting time and there’s a lot of interesting challenges. And suddenly everybody’s an expert on steel, even though they’ve probably never been to a steel plant [laughs.]”

The two biggest impediments to green hydrogen in steelmaking are volume and cost. The third, according to Brooks, is in metallurgical science, which comes with giant implications along the steelmaking value chain.

The requirements for the ore that gets reduced into iron and then made into steel will change, as processes using hydrogen are not good at getting rid of gangue materials, “and most of the iron ores in the world that are being sold are not that suitable for these processes… I have companies all around the world contacting me at the moment, essentially asking the same question: ‘How are we going to make steel from this stuff?””

Hematite (an estimated 96 per cent of Australian iron ore exports) is going down in quality over time, with more and more gangue in the mix. A lot of our ore is around 62 per cent iron, and newer processes using hydrogen would require a higher percentage. The industry is, according to Brooks, seriously wondering about questions like whether to invest in new processing methods, if they should process the steel locally, and if magnetite ores rather than hematite might be the future.

And what about Hybrit, the joint venture led by Sweden’s SSAB, and which recently began making fossil-free steel using hydrogen?

Brooks says they are using a combination of two technologies that are reasonably well-understood: Hyl3 (a variety of direct reduced iron process) and then renewable-powered electric arc furnaces. Hybrit is creating iron from ore in the first step using green hydrogen instead of the usual natural gas — which contains about 70 per cent hydrogen — with some new processing tweaks. 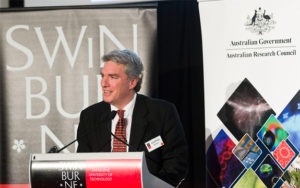 Brooks says Hybrit has its challenges, but is not the greatest metallurgical trick ever pulled. Also, more detail is needed before it could be called revolutionary.

“They haven’t reported any technical data. For example, you typically take — when you have an electric furnace and you melt down some iron to make the steel — you might expect 40 to 50 minutes of meltdown time to make steel and refine it. They haven’t told us what that time is,” offers Brooks.

“If it doubled takt time and halved the productivity then that’s huge. 20 per cent would be an issue, but not overwhelming. Until we know those details, a metallurgist like me will just go, ‘that’s great. Good on them,’ but I don’t know how viable it is when you scale it up.”

So while it’s a hot topic, there are reasons to believe that hydrogen has some way to go before it reshapes the steel industry in Australia or elsewhere.

One area where the industry could lower its carbon footprint in a much more realistic way would be to upgrade recycling capacity and to switch to renewable power, believes Brooks.

About 30 per cent of the world’s total steelmaking is recycled steel using arc furnaces. In the US, it’s about 70 per cent. Here it’s much lower.

Blast furnace processing produces roughly two tonnes of CO2 per tonne of steel. Arc furnaces create about 0.4 tonnes of CO2 (mostly represented by energy use) for the same amount.

“Steel recycling is probably the most successful recycling industry we’ve got, right? …Why don’t we just cut out the middle bit of hydrogen and just recycle our steel using renewable energy?” Brooks asks.

“Everybody is talking about hydrogen so much. This is much easier. We don’t have to build up all that hydrogen infrastructure.”