The 1990s to mid-2000s were a dark era for people who wanted to build worthwhile things, believes Jefferson Harcourt.

The Executive Chair of Grey Innovation mentions LA Law on TV and a popular “McKinsey way of axing R&D, a race to the bottom on product, price and features” in companies, and contends that evolution “almost stopped” until everybody got computers in their pockets.

“We came out of that stupor on the back of Steve Jobs, thank goodness,” Harcourt, who founded technology commercialisation business Grey in 1998, tells @AuManufacturing.

“You think about what really changed before the iPhone, and how different is the world afterwards? And our heroes changed, and suddenly doing and designing and making became sexy. Before that, lawyers were sexy.”

Perceptions have improved, but there’s so much more to be done here to build the finance, skills, networks and many other elements that technology development and modern-day manufacturing demand. 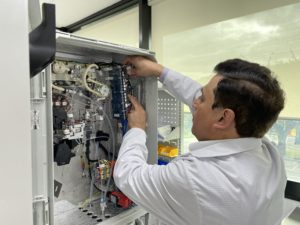 Grey Innovation was the project lead on last year’s notus project, assembling a team of other engineering and manufacturing companies to deliver 2,000 invasive ventilators, made under licence from Smiths Medical, to the National Stockpile.

This year the company — which has a collection of technology startups, mainly in medtech, in its portfolio — launched Grey Innovation Ventures, its venture capital fund. The ambition is to address a national weak spot: assembling the money, public research and people who can develop lab breakthroughs into impactful technologies.

“It does represent in many ways the first vertically-integrated innovation system that we’ve seen, all the way from being able to walk into a university and start with a glint in the eye of a researcher all the way through to VC funding,” Harcourt explains.

“It used to be done — that was called in-house commercialisation. That was Bell Labs. Westinghouse. That model changed the world and works so well. So we want to bring that back.”

Among current projects are three that make use of “capillary zone electrophoresis” methods discovered by separation scientists at University of Tasmania. Following years of development, this was turned into explosive detectors able to detect traces of chemicals used in explosives in less than a minute, and is now sold by GreyScan to airports around the world. This work won the team behind it a Eureka Prize in 2019.

More recently, the ability to detect certain substances at levels as small as ten parts per billion was applied to Sars-Cov-2 virus proteins and nucleic acids, able to pick these up on surfaces and in a person’s breath.

And about two years ago, another company was formed, Eco Detection, to adapt the IP to measure different chemicals in water.

“The details have diverged a bit now because Eco has adapted the technology to its application, which is quite different, but the core principles are the same,” says Harcourt. The monitors (pictured left) are in use at a few sites in Australia and New Zealand, providing remote, regular water quality information updates, and Eco Detection aims to replace manual, intermittent sampling.

According to the company, it can be useful in inferring events such as a river bank eroding and falling in, or proliferation of blue-green algae, through changes to what’s in the water.

The last two years have seen collaborations with potential end users — councils and scientists — to better understand their needs, with further trials planned for abattoir, construction, groundwater and other environments.

Papers and patents and products

Talks with UTas to licence foundational technology began in about 2014, says Harcourt. Previous work with CSIRO on a project called Cybernose, spawning relationships with senior Australian Defence Force staff and counterterrorism experts around the world, led the Grey team to understand they were onto something useful.

While lab work led by Professor Michael Breadmore was impressive, there is always a long distance between the lab and a finished product, says Harcourt.

A product for airports, detecting a potential bomb 40 minutes after sampling, would be of little use. The university team brought this down to five minutes, and then engineers at Grey took it to 40 seconds.

“In those first meetings, I realised that we had a lot of the other pieces to the puzzle and we knew where to find the IP that either Grey or UTas had… It was really looking at that systems approach of ‘what does it all mean if we can bring it together?’

“I think that’s something that is not well understood, that particularly some universities also can get a little bit hung up on: the fact that there is a systems approach. It’s different to, say, drugs, where you might licence the molecule and that molecule and the IP really is the IP.

“It’s not like that when it comes to complex systems, medical devices or the sorts of instruments we’re doing, with lots of pieces of IP.”

Like other big questions, “how do we better commercialise what’s discovered in universities?” can’t be simply answered. There are too many different parts acting together.

The same can be said when it comes to creating enough of the skills needed to grow high-tech manufacturing companies within Australia.

Last week it was reported that the Group of Eight universities told a Senate inquiry into manufacturing that the nation would likely need to double the number of domestic engineering graduates (and places) in the next three years. 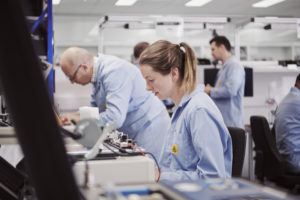 Harcourt, who studied mechanical and electrical engineering at Swinburne, believes the issue is much broader than places on offer and how much they cost, and more needs doing to make the profession attractive and better understood. This is as much the role of engineers themselves as anyone else.

“I think when children grow up in Silicon Valley, they have a very different attitude to what it is to be an engineer or a computer scientist [compared] to here. and I think by the time you’re trying to influence from a university perspective, it’s too late,” he offers, adding that it needs to pay well and for that reason talent is being lost to banks.

Growing the companies that can grow local opportunities for technically skilled workers also takes finance, another area where the country could arguably do better.

Though venture capital availability has improved in recent years, we’re still a nation that would much rather invest in property than new businesses.

So what’s Grey Innovation Ventures witnessed since announcing in April that it’s seeking $100 million for its ESVCLP fund? Should we feel optimistic about support from those who want to see worthwhile things built, and which require more patience than a house or an app?

“The super funds, the institutional investors, have a responsible and long-term view that is really, really enlightening and pleasing,” answers Harcourt.

“Sadly, you wouldn’t go near Collins Street or a broker. I think that is a problem. If we want every investment to look like Afterpay, we’ll be cavemen with indebted children, without any technology to save ourselves. So the longer-term thinking of institutional investors is certainly our friend, and we’re having some very good traction with those groups.”