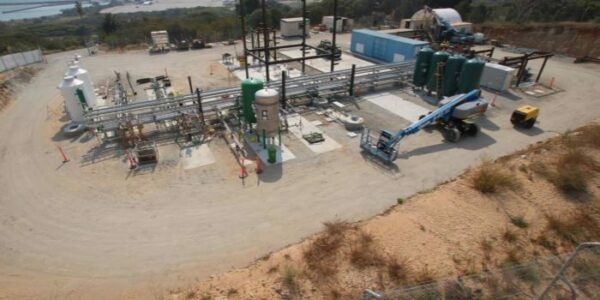 In a statement on Tuesday, the company told the ASX that construction and verification activities were completed over the last week by partner Primero Group, followed by commissioning. The first biogas is being introduced to the CDP, “marking the first planned phase of operational testing”.

“I would like to thank the team from Primero, our engineering and construction partner, for their hard work to deliver the construction program safely and effectively,” said CEO Geoff Ward.

“I would, in particular, like to recognise the teamwork of all involved in completing the construction without any safety or environmental incidents – an outstanding achievement in challenging conditions in a complex environment for a first-of-kind project.”

It said the CDP — which has a planned capacity of 100 tonnes per annum. — had been handed over to the Hazer operations team to continue the planned testing program.

The plant is co-located at the WA Water Corporation’s Woodman Point Wastewater Treatment plant in Munster, about 30 kilometres from Perth. Construction is being supported by $9.4 million in funding from the Australian Renewable Energy Agency (ARENA.), announced in September 2019.

The build has suffered delays, with an initial planned cost of $16 million revised up to $22 million last November.

The initial phase of testing would create process data to de-risk the second phase, involving “hot commissioning and full operation” of the plant, said Hazer.

A hot-wall reactor is currently being fabricated in China, ahead of planned delivery, final fabrication and fitout in Q3 and installation in Q4, allowing the company to achieve a goal of producing hydrogen and graphite by the end of 2022.

The milestone announced today was described as a key milestone in scaling up and demonstrating the commercial potential of Hazer’s process, which is “a world leading example of methane pyrolysis”.

According to the company, its process involves an inexpensive iron ore catalyst and converts biomethane into hydrogen, while trapping carbon in a synthetic graphite.

Hazer was formed in 2010 to commercialise research from the University of Western Australia.